A woman meets with her fiancé’s estranged brother but there is an attraction between them. 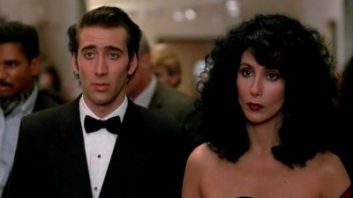 When discussing possible film choices to be reviewed with the 100th follower, several films, actors and genres were discussed and discounted. The original choice was Midnight in Paris (2011). So pen in hand I started to watch it, all was well until Michael Sheen’s appearance.  At which point darlin’ husband looked up from his work, cried “It’s Tony Blair” and then went back into his work again leaving me to try and continue with watching the film.

After that, I just couldn’t get back into the plot again as kept seeing Sheen in full tilt Blair mode. This actor’s similar looks to this former British Prime Minister also spoilt my viewing of the Tron sequel, Tron Legacy (2010) as at one point  Darlin’ Husband stated Sheenlooked like “an albino Tony Blair doing a David Bowie impression”.

Admittedly, I should have remembered this before Michael Sheen made his appearance, and before “Sheen is a beardy weirdy Tony Blair” got stuck circling in my head like when you see a really nice cake when on a diet. Another suggestion was a war film or a film with Bill Murray.

War films are great, but to be honest I prefer more of the story of the characters than the war sequences to remember who is fighting who and why. As for Bill Murray – also one of darlin’ husbands favourite actors – there are so many good films to choose from that I really wouldn’t know where to start… this guy deserves at least 5 blog entries.  So I promise at least one of his films will definitely get a blog entry soon.

As for the final film choice by this follower, for this, we return to the mid-1980s, during the many rainy, summer school holidays spent at home with my family in Scotland. During this time, my sisters and I often spent our time hoping that the ZX Spectrum would load successfully as it often crashed leading to much upset.

This was in the allegedly halcyon days you youngsters hear about, before DVDs, Playstation and Ipads when often we were encouraged to make our own entertainment. It also meant having to watch endless Cliff Richard films preceded by children’s tv delights such as Why Don’t You? (1973-95).

Unfortunately living on a farm in what seemed like the middle of nowhere, I must have had a lack of imagination or drive as my darlin’ husband says he did as the Why Don’t You theme tune suggested “go out and do something less boring instead”. One year, my mum and dad decided we should rent a video player for the summer.

On reflection, I assume this was so we wouldn’t squabble over whose turn it was to play Jet Set Willy or Manic Miner. Instead, we could squabble about what to watch on video. My sisters and I were allowed to pick videos, which in my case (sadly) only included my then crush Andrew McCarthy.

This involved me glued to the TV transfixed as he starred in anything from Mannequin (1987) to Less than Zero (1987) from Kansas (1988) to Weekend at Bernies (1989). Luckily for my family,  I’d left home and then moved my affections to someone else by the time Weekend at Bernies II (1993) came out.

My dad’s choice of film usually starred Stallone or Schwarzenegger which were more silly, fun and compared to many of the Brat Pack films haven’t dated as badly. Luckily Finnish TV repeats these Stallone and Schwarzenegger’s earlier films regularly.

My husband then mocks me for not watching them. I now watch these ’80s classics with him accompanied by his impersonations of Arnie as they both pun simultaneously in the same unique Austrian accent.

My mum however tended to go for Oscar-winning films usually with the leading ladies of the time Cher or Meryl Streep. This brings me to the subject to be reviewed today.  Cue drum roll…as the 100th follower choice is one not only for this follower but for my mum, your mum or your granny depending on how close in age she is to leading actress Cher.

Cher won a Best Actress for this role. In reading more on IMDB I was surprised to learn that Cher is only 15 years younger than her fellow Oscar-winning co-star,  Olympia Dukakis who plays her mother. The film also stars Frasier‘s dad John Mahoney and…. a 23-year-old Nicolas Cage who is about 18 years younger than Cher.

Cher demanded Cage for the role which made me giggle as imagined her sounding like Joan Collins – lying on a couch surrounded by younger men  – a bit like in her “If I could turn back time” video –  in a casting room ordering some poor casting agent to “Bring me Cage as my toyboy”.

But onto the review, Moonstruck is the six times nominated Oscar-winning Best Picture of 1987. The story is a romantic comedy that tells about a 37-year-old widow and accountant, Loretta Castorini. She lives with her parents and her grandfather. She is greying and unusual by Cher standards, a wee bit on the dowdy side-dressing conservatively and wearing little makeup.

Loretta accepts her older boyfriend Johnny Cammareri’s (Danny Aiello) marriage proposal before he leaves for Sicily to visit his dying mother. Loretta says she wants a traditional wedding as believes her first marriage was cursed. This she believes was due to her marrying her previous husband at City Hall and had led to the believed curse of his untimely death in an accident.

Just before Johnny leaves, Johnny asks Loretta to contact his estranged, much, much younger brother (by about 20+ years if you go by the real-life actors’ ages),  Ronny (Cage) to invite him to their impending wedding.  Loretta meanwhile shares the news of her engagement with her mother Rose  (Olympia Dukakis) and her father Cosmo (Vincent Gardenia).

She confides with her mother that she only likes Johnny and does not love him which pleases her mother who believes women go crazy if they love their partner. Meanwhile, her father is concerned about how much a traditional wedding will cost. Loretta contacts Ronny by phone but he hangs up on her.

Loretta finds out Ronny works in a local bakery. On visiting him there she finds out that Ronny still blames Johnny for losing his hand in an accident involving a bread slicer. He states this led to him losing his then fiance and leads to a Star Wars reference about Luke Skywalker from my darlin’ husband.

Loretta confronts Ronny about this matter in his apartment as she cooks him a steak (as you do when you confront your future brother in law about his love life??). He retaliates angrily and confronts her about her late husband’s death. The two then kiss passionately and make love.

Meanwhile, Rose’s brother, Raymond and wife visit Loretta’s parents. Raymond marvels about the moon. He states he once saw a moon like this as a child when Rose and Cosmo were first dating. Raymond says he believed then that Cosmo brought it to their house as he was in love with his sister.  Loretta and Ronny see the same moon from the window at his home.

The next morning Loretta wakes up with Ronny and states firmly that she can’t see him again. However, at his insistence, she agrees to go to the opera with him. She then has a bit of a Cher makeover and gets a new hairdo, makeup and evening dress (as you do when you never want to be with someone??) and on arriving home her mother tells her she is afraid that she thinks Cosmo is having an affair…

If you want to know what happens next it’s up to you, you have at least two choices… you can look up Wikipedia or you can hunt this down on DVD. But then ponder the appearance of Cage’s chest hair which now has since appeared and reappeared at random in his movies. This depending on if he has to wear a vest, which gives new poignant meaning to the phrase “wax on, wax off”…