Yearning for those Painful Adolescent Years?

Back to school in an adult comedy. 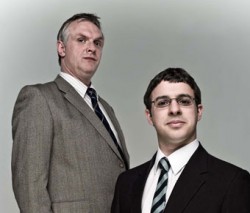 As a woman, I felt more than a tad uncomfortable as I watched Jessica Barden as Jody with her school friend in their idolatry, devotion and pursuit of their drummer dream boy, Ben – played by Dominic Cooper – in Tamara Drewe (2010). This was especially when darlin’ husband asked me if young girls are like that in their teenage years in their pursuit of the object of their affections.

This led to flashbacks of memories from that time including the working out of possible married names friends and I would have in the not too distant future – and which hopeful friends and I thought would inevitably happen – as soon as we plucked up enough courage to say hi to the lad we fancied. A given fact I believed as a hopelessly romantic girl.

The TV show equivalent for guys in returning to their school days, darlin’ husband confirmed with me – as I have 2 sisters and therefore little insight into the adolescent schoolboy – is watching an episode, series or the box set of the British TV comedy series, The Inbetweeners (2008-10).

It starts off as minor and ends up with major embarrassment for all concerned. As the series is incidentally is not just feared by men, but also girls along with teachers and parents. So if you are really unlucky you have three out of four reasons to hide behind something. So get that something now in case my review triggers something painful…

As I did with my last review on Life on Mars (2006-8) – shameless promo time – I’ll be talking about the British TV version of the comedy series as opposed to the American one. The British version lasted for three seasons and then two films. The American one like Life on Mars was cancelled after one season. But for the purposes of review, I’m going to talk about the first episode of the series.

The show is narrated by and centres around Will (Simon Bird), a nerdy-looking lad who has just left public school to start the sixth form at the local state comprehensive.  Will’s father has just divorced his mother and they have money problems. He has to make new friends, which he does during the first episode the forms of Simon (Joe Thomas), Jay (James Buckley) and Neil (Blake Harrison), but makes more than a few enemies. But I continue to stress this is an adult comedy about the school day adventures of our intrepid foursome.

The first episode centres on Will’s first day, where he is given a badge to say he is a newbie.  He instantly forms a life long enemy with his teacher Mr Gilbert (Greg Davies). This is after Will complains about his humiliation of wearing this badge then finding out Gilbert is the mastermind behind it. Mr Gilbert is extremely tall – both in real life (the actor is 6ft 8) and via clever camera shots, jaded and patronising.

Gilbert obviously hates his job and the children he teaches treating them with the same distaste as the baddie ringleader Hans Gruber (Alan Rickman) had for everyone in Die Hard (1988). Things continue to get worse for Will as he slates this teacher in front of the class to find out he is behind him, a situation I recognised immediately from City Slickers (1991), the Billy Crystal film comedy. Anyway, in the course of his day, he meets up – and eventually teams up – with the other lead characters.

Bird is a perfect Simon and I see him more in this role than the others mentioned on IMDb including the aforementioned Dominic Cooper. This actor auditioned along with Doctor Who actor Matt Smith. Simon, the most likeable of the four, is hopelessly in love with Carli. His friends, even the dim-witted Neil, know it is a hopeless case and usually tell him so in the same unsupportive style boys – and little siblings – do.

Jay the wannabe wide boy who confabulates about everything particularly sex and brags constantly about his alleged sexual adventures and experiences. With his bragging and the screen evidence you can tell the nearest he has got to a girl is his Playboy magazine. Neil, tall, lanky and a bit gormless with no insight into his ability to say stupid and inappropriate things.

As we Scots would say a wee bit gleekit. Anyway, the boys are planning to go out – with the rest of the class –  to a pub for the first day of term tradition, which leads to many a comic – albeit excruciating – moment.

Which a friend who is a hottie confirmed does happen after overhearing her adolescent son and his friends discussing her (much to our amusement). There are fake ids, as Jay has an Australian one and even puts on an Aussie accent in a quest to get a pint. And as Carly (in)directly leads Simon onto thinking they will meet up in the pub, you feel bad for the boys in your class for being (in)directly being a flirt.

There’s Will’s desperateness to be accepted with his friends and the class. You can almost feel his hope when he tries to get served in the pub, fails, then takes all desperate measures.

Throughout the series, there are many, many moments you feel this agony and you feel the pain and humiliation you experienced as a teen open up once more. It doesn’t end there as the parents although stereotypical is, therefore, more true to life and you catch yourself thinking my parents did that, I won’t do that.

By the end of the programme, as a girl, I wished like Claire in Outlander (2014) – or Alex in Ashes to Ashes (2008-10) – I could go back in time and advise my younger school day self on what you are often reminded by your parents as best years of your life.

Always A Bridesmaid Blogathon 2019 No 43

This post was added to Hollywood Genes’ Always A Bridesmaid Film Blogathon. As yet I’ve not written any other reviews with this cast. However, more British films and TV posts can be found HERE  and HERE respectively and in my A – Z pages.