And Then There Were Six…

As a kid I loved watching Doris Day movies with my dad, with her warm friendly and chirpy comic roles usually with a song for at least one occasion, be it in the film itself or the soundtrack.  Day had a string of leading men that reads like a who’s who of the 1950s (and beyond) pin-ups, with her on-set lovers including then big time names such as Rock Hudson, Cary Grant, James Garner and Clark Gable.

My favourite of her movies – with two of my much-loved actors at the time – were the comedies Pillow Talk (1959) with Rock Hudson and That Touch of Mink (1962) with Cary Grant. And so it was with trepidation I watched Down with Love (2003) – a film Darlin’ Husband introduced me to – fearing this homage to these movies wouldn’t be as good as those original battle of sex comedies of yesteryear. I needn’t have worried though…

However, my favourite of her male co-stars however was from Young at Heart (1954), my favourite of her movies, as had a bit of a crush on Gig Young’s character the good-natured and handsome Alex, and was shocked when my mother told me the film had been made at least 25 years previously and he was in his sixties.

I loved this movie but never understood why Doris’ Laurie left the lovely Gig as Alex for Frank Sinatra’s Barney. Apart from the fact that Barney could sing duets with her and play the piano, he wasn’t as dashing, sweet or gentlemanly. But I loved the title song of the soundtrack. Which is disturbingly in my head as I write, but not sung by Morgan Freeman I hasten to add.

So looking at her filmography, I chose this film, intriguingly titled With Six You Get Egg Roll (1968) to review as I wanted to find out more about this title, which luckily is explained in the film with the now large blended Iverson family get something extra in a Chinese restaurant as there are so many of them. Leading to a child exclaiming excitedly… With six you get eggroll!

I also was interested in Day’s supporting cast recognising two more recently familiar names in the cast. The first being Barbara Hershey, an actress I loved in Beaches (1988) and more latterly in Black Swan (2010). The other actor being George Carlin who I always enjoy seeing in his Kevin Smith comedy movie appearances including Jay and Bob Strike Back (2001) and Dogma (1999). And Darlin’ Husband remembers as Rufus in the Bill and Ted movies.

I settled down to watch this movie.. a romantic comedy with no singing involved. I’m stressing this now for the non-musical lovers as having watched Jeanette MacDonald and Nelson Eddy films – again with my dad – it did disturb me when they suddenly burst into song without prior warning. A bit like Russell Crowe did in the clips I’ve watched of Les Miserables (2012). Les Miserables is a film on the Requested list, which I’d like to see for Hugh Jackman but I have a bit of an aversion to Eddie Redmayne. So once I get over that expect a review!

The opening credits for With Six You Get Egg Roll are a delight, featuring what seems to be a tribute to the drawing talents of one of the cast or crew’s kids. Cool childishly drawn animation with bright colours and apt wee cartoons describing the crew’s roles are used and it’s almost like the results of this as a homework related task. Or a Blue Peter (1958) competition.

The film tells of widowed Abby McClure, who has three boys and is constantly being fixed up by her sister.  Her sister on looking through her sister’s file box – similar to one owned by Carrie Fisher’s Marie in When Harry Met Sally (1989) but with work contacts, not men  – “accidentally” phones one of these men, Jake Iverson (Brian Keith). She prompts her sister to ask him to her dinner party that evening.  Having only got a 1960s style ready meal for his dinner he accepts.

And we meet his teenage daughter, Stacey (Hershey). Leading to panic, slapstick comedy and an introduction to her children and the family mutt in the McClure household. Flip, the eldest is about to graduate and the much younger Mitch and Jason. With a comic, chirpy Doris Day themed music accompanying her to match. But no singing.

Meanwhile, Cleo, Jake’s neighbour is coming onto him and she’s quite persistent in the pursuit of her silver fox, in reality, more cuddly Brian Denney. She gets more sultry music – almost to James Bond meets sexy adversary that he will most certainly bed at least once proportions – as she flirts with him.

So at the dinner party, things get a tad painful from as he arrives at the wrong moment in the midst of family chaos, to meeting the ultra irritating guests.  Jake leaves makes an excuse to leave. But he is caught lying after he’s spotted in the supermarket by Abby shortly after the dinner party ends. She forgives him, they have a spontaneous date at the Drive-in Diner with the comedy George Carlin role as Herbie. They both drive home to hers, at a late hour and he moves in for a kiss. Which is suggested…

The pair then arrange for a date, which again he avoids with an apparent lie saying it’s his daughter’s birthday and again gets caught. Both are attending a fab 1960s disco – complete with a really cool 1960s pop combo, The Grassroots – as in Dracula 1972 AD (1972)  as Abby spots him with a mysterious leggy brunette under a disco ball. Abby gives him the boot, but then Jake apologises with some wine leading to some really weirdly cool 1960s romantic scenes involving a log fire, some kissing and… a kaleidoscope effect that makes you dizzy.

So as both and Flip graduate together, Abby and Jake date – usually ending up at the Diner Drive In –  much to their eldest kids anger and upset. Flip adopting the father role telling his mother off for staying out till 11 and says he’s having an affair. So Abby and Jake decide there’s only one way they can date anywhere other than the Drive In.

Then to a heavenly Chorus of Hallelujah and a smoky soft-focus dream-like scene, get married. Then shocking all their kids with this news after he stays over for the first time and they wake up the following morning to her youngest screaming “There’s a man in bed with mummy!”

So after this, the film concentrates on the aftermath of this news. The remainder of the film has sadly only a few moments where it shines – notably Day’s scenes with Hershey – but then it all goes rapidly silly involving hippies, a camper van and that Drive in Diner (again) – more annoying over the top slapstick. These type of scenes done more subtly and effectively by Carole Lombard in Nothing Sacred (1937), a few decades earlier.

There are more recognisable acting faces such as Jamie Farr and William Christopher from M*A*S*H (1972-83). Both add to the silliness but which to be honest I could have done without. This was a shame this plot was added after the film’s more promising start.

Yet after the egg roll scene, the plot became an almost contrived attempt to find a happy ending to the film. Other fun features included the use of a split-screen effect – sadly only the one time – remembered more fondly in Pillow Talk and carried out more memorably in Down With Love. Doris Day’s frocks were fantastic, and I must admit I had wardrobe envy more than a few times.

Day was her usual chirpy self and it was sad she stopped making movies after this one. She definitely is more suited to romantic comedy type roles. It a shame didn’t have more roles like this as her scenes with Hershey were lovely and touching. Hershey gave a fabulous debut as the spoilt little daddy’s princess usurped by her new stepmother.

Brian Keith, who was remembered as the dad in Hayley Mills’ The Parent Trap (1961), seemed a lot more realistic a love interest for her character. Of course, being a Doris Day movie it all ends on a sugary note, and no she doesn’t sing. Nor does the family in a Von Trapp family type chorus. Then I really would call it a Day and leave before the credits rolled. 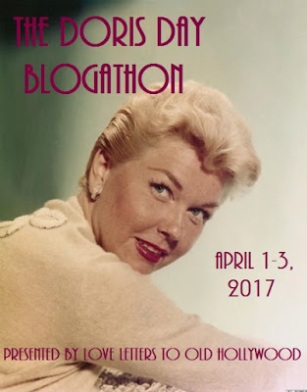 This movie was entered as part of the Doris Day Blogathon run by Love Letters to Old Hollywood. Other films with this cast include Beaches and Black Swan with Barbara Hershey. George Carlin in Jay and Bob Strike Back. Jamie Farr in MASH and The Cannonball Run Doris Day stars in Pillow Talk, Teacher’s Pet, The Thrill of it All, Young at Heart and tribute on her HERE when she passed away. Brian Keith starred in Meteor and The Parent Trap.