In this Oscar nominated 1970s film drama for Best Film, a news anchorman has a breakdown on air, and becomes a rating winner. 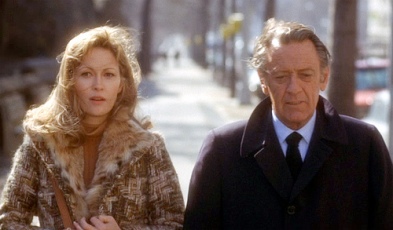 This film, made two years after The Towering Inferno (1974) which made a sly reference to architects’ then obsession with designing supertall buildings. Network (1976) made a not so subtle dig at the television network companies and their obsession with winning the ratings war in this chilling almost prophetic film of television to come. Like The Towering Inferno, Network stars Faye Dunaway and William Holden as part of a 1970s ensemble cast. The reminder of the cast includes Ned Beatty, Peter Finch and Robert Duvall. However unlike the skyscraper disaster movie, this film won four Oscars. William Holden was nominated for Best Leading Actor for this movie, but lost to his co-star, Peter Finch. Oscars were also given to the two actresses most closely linked to Holden’s character, Faye Dunaway winning Best Actress and to Beatrice Straight a Best Supporting Actress Award. The other Academy Award going to Paddy Chayefsky for his screenplay.

Network starts with one of those great split screen moments, with the screen divided into four each representing the four different network evening news programmes. These included the Union Broadcasting System (UBS) Network – the fictional network which this film relates to – the others being real life ones. This satirical tale tells of UBS Evening News’ anchorman Howard Beale (Finch) and his rise and fall in show business. It is revealed in the opening narration that Beale had been drinking heavily since his wife’s death. In the first scene with his long time friend and Head of the News Department of UBS, Max Schumacher (Holden), Schumacher tells Beale he has two weeks notice. This is due to a decline in his performance and the falling subsequent ratings. This pair then go drinking with Beale telling his friend he will commit suicide by blowing his brains out live on air. The pair joke about this as a ratings winner and this topic escalates cumulating with an over the top, imaginary series called Terrorist of the Week.

Beale reports in his next broadcast that he has been fired and will shoot himself in the show the following week – before being manhandled off-screen – to the horror of the audience and the off-screen crew at the network company. Off air its panic, and footsteps with the appearance of one of the UBS Executive Vice Presidents, Frank Hackett (Duvall) going ballistic demanding that Beale is taken off air and is fired with immediate effect. Schumacher comes to blows with Hackett about this decision and defends his friend. The audience is placated with a  statement relating to Beale’s ongoing stress given at the end of the show. Off screen, Hackett angrily berating to Schumacher that his news division is making a huge loss.

Schumacher meets Diana Christensen (Faye Dunaway) – who works as Vice President in programming at a screening. Christensen is passionate about developing a sensational real life show on terrorism as related by the terrorists themselves. A call comes through from Beale apologising for the incident and he is given a chance to redeem himself on air.  In a meeting with Hackett and the other UBS company big wigs, Schumacher is horrified to learn his news department is subject to major cuts. He is dismayed he wasn’t briefed earlier.

However on his final news show, Beale goes off on a full-scale rant talking about his suicidal plans and claiming everything is “bullshit”. The public taking to heart one of his phrases “I’m as mad as hell, and I’m not going to take this anymore!” and many people accepting his invitation to shout it from the rooftops. Schumacher allows his friend to continue his off load his and anger on-screen, but he is reprimanded for this action and fired for this. However, Beale’s outburst causes a sharp increase in the ratings and catches the employees, public and press’ attention.  This gaining attention from Hackett, the powers that be at UBS and from Christensen.

Christensen argues to Hackett that Beale’s rants will win ratings and would make great TV, with Hackett proposing this idea to the powers that be. This idea comes to fruition, however Schumacher is disgusted feels his friend is being exploited as he feels Beale needs treatment. However shockingly Beale is on board. Christensen tells Schumacher that a clairvoyant sees her with an older man and makes a pass at him. She asks the now reinstated Schumacher to work with him to develop his news show into something that will increase his ratings. Schumacher and Christensen then go on a date – despite Schumacher being married – where she confesses a student crush on him and the pair sleep together. The network however is now led by Hackett hand over Schumacher’s news show to be developed by Christensen. Beale becomes an instant overnight celebrity with his own magazine type show where he stirs the public’s feeling with his increasingly unhinged rants. He is seen as a prophet…

This film has a fantastic moral edge to it, with Holden as Schumacher appearing to be the only one with any work ethics in this television behind the scenes tale. However his morals surprisingly were lacking in his bedroom antics with him falling into bed with Christensen after possibly the most contrived chat up line out, risking his 25-year-old marriage in the process. Holden gave a strong performance in the film, as an advocate for Beale and his loyalty was apparent to his friend and the news division as he battled to keep it from becoming over-sensational. Interestingly, Holden was initially offered the part of Howard Beale, but turned down to take on Schumacher one.

Christensen came over as a horrible, work obsessed woman with no feeling for anyone including Max. She even talked about her work in her love-making scene with Schumacher. In this behaviour, Holden stresses showed the weakness in this woman’s character. She was ambitious and passionate about her work sort of like an Anti-Becky in another film but relating to a failing TV show, Morning Glory (2010). In Morning Glory, Rachel McAdams plays Becky who like Christensen is enthusiastic about gaining ratings. However instead of taking advantage of her anchorman in a negative way she discovers his positive attributes and gently encourages him. This led to a wonderful, sweet conclusion. And possibly more of this guilty pleasure at a later date. Christensen in contrast with her lack of understanding of human nature took advantage of an unwell man. Duvall’s Hackett came over as quite powerful and ruthless – getting the admiration from Christensen – and clashing with the more strong but more stable Schumacher. Duvall as Hackett shouted in almost every scene he acted in, which was a bit unnerving but added to his odiousness.

I did like this film though and it had a lot to say about the then – and current – obsession with ratings as shows become more and more sensational. Using the subject of a news programme to be sensationalised was a nice touch. It hit a nerve for many as people just want to see the news as a report of daily happenings and not an all singing, all dancing number where the importance and seriousness of the facts is lost. However after seeing this movie, I’ll tell you that the scenes following my cut off in the story are more shocking than Ricky Gervais making a politically correct comment about a token celebrity. And see if you can spot the uncredited cameo from a now more famous household name. Allegedly. The ending is as dark as it gets as Schumacher will hold on to his morals, as the problem of the falling ratings are Dunaway with. 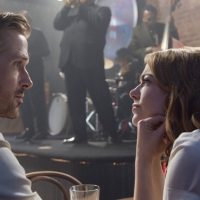 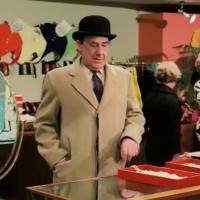