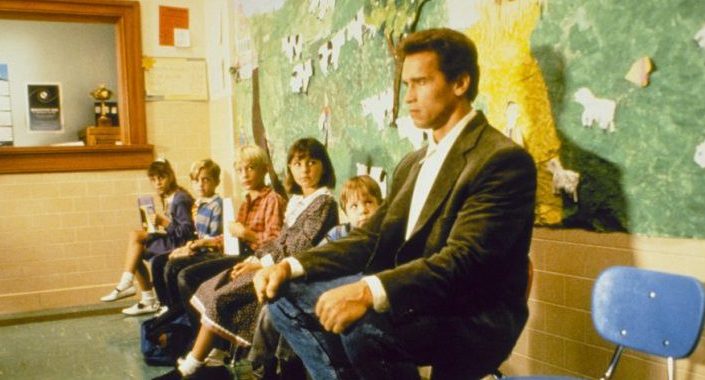 A cop must go undercover as a Kindergarten teacher to find a witness and her son, but her ex is on her trail.

Usually, the mere mention of Schwarzenegger and certain comedy films and some movie critics hang their head in despair. As they remember the delights of Jingle All the Way (1996) and Junior (1994). They’ll agree wholeheartedly that yes, Schwarzenegger is good at delivering those puns in his action movies, but 100% comedy is not Schwarzenegger’s bag.

That is – unless I’m alone in this thinking – until you mention this Schwarzenegger heartwarming comedy, with a diminutive co-star and a pretty blonde love interest. No, I’m not talking Twins (1998) which bizarrely also has this formula in the form of Danny DeVito and Kelly Preston.

But today I’m telling you about my thoughts on a Schwarzenegger romantic-action-comedy, Kindergarten Cop (1990) with Linda Hunt and the always lovely Penelope Ann Miller. After spotting the Good Cop, Bad Cop blogathon, I originally had thought of examining Gene Hunt, aka the Manch. Lion aka Philip Glenister – with a Manchester Accent – much more closely. Yes much, much more intensely.

But this movie won me over for two reasons. Firstly that I adore Gene Hunt so chances are he might make an appearance this year in a post, that is if the Reel Infatuation blogathon happens. Hunt would join my previous entries with JR Ewing (Dallas (of course) and Hank Moody (Californication).

Secondly, I wanted to review another movie with Penelope Ann Miller. This as this wonderful film actress has shared, liked and given some lovely support with comments to this blog on Twitter. As I like to thank these stars who do this with a review of more of their work, this was the perfect opportunity to express my gratitude.

If you want to read these reviews then click here for her appearances in Awakenings (1990) and here for Adventures in Babysitting (1987). The tweets themselves are mentioned here with more to come. Your time will come Stephen (Deutsch) Simon, I promise.

Anyway on with the film plot. We meet a tough often bad cop, John Kimble (Schwarzenegger) in the opening credits on the tail of a Kurt Russell (or is it just me?) lookalike – with a ponytail – in a shopping mall.

Kimble is unshaven, dishevelled looking with a trench coat. In fact, I could go as far as describing him as a younger Columbo with muscles, if you ignore the facial stubble. Along with the gun, the shades and the Austrian accent. Anyway, Kimble follows Cullen Crisp (Richard Tyson), a drug overlord who unaware of his pursuer, gives him the slip.

Crisp meets with an informant, Danny who says he knows the whereabouts of Crisp’s ex-wife, Rachel and his child Cullen jr. And this makes Crisp a happy man as she allegedly stole Crisp’s drug money. After telling him that she’s in Astoria, Crisp shoots him dead.

This is witnessed by Danny’s girlfriend, Cindy. Then Crisp exits, with Kimble finding her with the dead Danny. Handcuffing them together, Kimble goes on the search of Crisp, and then just as then Crisp tells his mummy Eleanor (Carroll Baker) he’s found his ex and his son… Kimble arrests him, after some gunfire.

We then see Schwarzenegger in full tough cop mode, with his unorthodox tactics and methods, but which he’d argue get the job done. But Kimble plays it rough with Crisp to confess, then later Kimble intimidates Cindy to give evidence to frame Crisp. Cindy relents and identifies him in a lineup.

Kimble then meets his new police partner, Phoebe (Pamela Reed) with the task to find Crisp’s former wife and his son to recover the drug money, and let justice prevail. They can offer her immunity if she testifies against her former husband now in custody.

Kimble and Phoebe head to Astoria (also the home of The Goonies). There they intend to pose as a married couple with her working undercover in a Kindergarten. En route to Astoria, it’s also made obvious just how much Kimble easily loses his patience with kids.

We learn that Phoebe’s understanding comes from a previous job as a teacher.  Phoebe falls unwell with an upset stomach so intensely she takes to her bed. Meaning one thing, it’s back to school again for Kimble. So after a shave, doing away with the shades and donning a suit, he takes on that undercover teaching role in the kindergarten.

He meets the then unruly kids and ending with Kimble begging an empathetic Phoebe to take over. But this will blow his cover. He’s supported through his more difficult moments by the pretty blonde teacher, Joyce (Miller) whose kid Dominic in his class. The four go to dinner together, with Phoebe noting Joyce and Kimble’s mutual attraction, now saying she’s his sister.

However, after Kimble showing some discipline and introducing a class mascot with his pet ferret, cue more cute scenes. The highlight being Schwarzenegger singing Old MacDonald Had a Farm with the kids. This will shock or charm you dependant on just how many action movies you’ve seen with this leading man.

Kimble’s presence and teaching methods are then a hit with the kids and headmistress (Hunt). This warms her to him, after her initial fears and scepticism. Kimble’s also seen as a bit of a hottie with their mums as the hot male kindergarten teacher.

He narrows Crisp’s family down to two kids in his class, after discounting his co-worker, Joyce and son Dominic (Christian and Joseph Cousins). This leading him to think it’s another pretty blonde Jillian (Cathy Moriarty) and her son or a physically abused mother and son.

As Phoebe continues to get better, Kimble gets close to Joyce with obvious romantic chemistry and attraction between them. Joyce invites him for dinner and as the pair grow closer. Rachel lets him in on her most guarded secret, as she reveals she and Dominic’s past as Rachel and Cullen Jnr Crisp.

This after her son’s talk with Kimble about how he will keep safe bad guys from earlier that evening. It appears Kimble has found his girl. Just as the bad guy drives into Astoria with his mother in tow…after his case dismissed when the prime witness, Cindy is killed…

You will have to watch it to find out the conclusion to this tale! But I’d highly recommend it but for those much, much over kindergarten age. This due to the more violent scenes later in the tale and the adult themed speech and content. However, the script is wonderful showing Kimble’s character arc from bad cop to a good cop and much-loved teacher.

In all of this Schwarzenegger is believable and his screen presence as befitting with the other characters. Schwarzenegger is perfect casting due to his size, build and presence looking like Gulliver amongst the little people in his scenes with the children.  Which makes his initial scenes in the kindergarten all the funnier as the kids play havoc around him.

His later scenes with the kids and Miller showing a softer, caring side to his character with Schwarzenegger showing a rare, sensitive side to his acting. He’s perfect casting and its hard to see others in this role such as Patrick Swayze and Bill Murray.

Interestingly I also read Danny DeVito went for this role and was turned down due to his height. However, this information is debated online. Perhaps, if this was true he should have gone for the headteacher role where this didn’t seem an issue.

Linda Hunt gave an impressive, memorable turn as the straight-talking headmistress and her scenes with Schwarzenegger a delight. As the bad guys, devoted mother Eleanor and son Cullen Crisp, both were wonderfully fun villains. And it was nice to see Cathy Moriarty again, after seeing her in Soapdish (1991).

Penelope Ann Miller, again proved how naturally, sincerely and credibly she plays all her characters echoing these attributes as seen in her portrayal in her Awakenings role. Her on-screen burgeoning romance and chemistry with Schwarzenegger were lovely to watch (and yes I did sob a lot during this film as a result of this) from start to finish.

As the film developed, she showed much more depth to her acting from roles I’ve seen her in previously. This particularly as her character confronts her former husband. She showed similar support and rapport to her screen son. These attributes all added up to this rounded performance as a teacher, mother and love interest.

The twins, playing her son – Christian and Joseph Cousins – in their first film roles also showed an easy rapport and did not seem intimated by those more famous adults. Bizarrely I felt that this film may have indirectly been inspired by Grease 2 (1982) soundtrack titles. These including Back to School, Charades and Who’s that Guy almost reminiscent of scenes in this movie.

So in this vein, I urge you to watch this film to see if after Kimble reveals all about his true profession if he will be able to be Together Again with Rachel by the end of the movie. But a wee bit of advice if you cry at films, do get those all essential tissues. 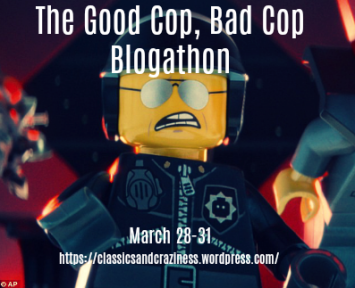 This film review was added to Coffee, Classics and Craziness‘ The Good Cop Bad Cop Blogathon. Other reviews with this cast include Penelope Ann Miller in Awakenings and Adventures in Babysitting. Pamela Reed stars in Savannah Sunrise and Dynasty, The Making of a Guilty Pleasure. Christian and Joseph Cousins star in Knots Landing. Cathy Moriarty stars in Soapdish.