Joseph Cotten heads the bill in a TV suspense filled story with the Master of Suspense, in their last collaboration. 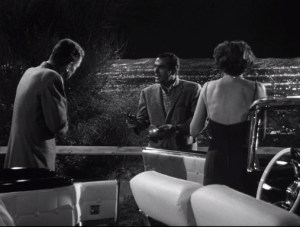 Enjoyable blogathons include those with new acting names to discover, and those with new films and television to view. I’d spotted (but not identified) joseph Cotten in a sea of acting talent in a seventies Airport disaster movie. Here the actor starred as Olivia De Havilland’s character’s old flame, with the pair reunited just as the plane literally hit rock bottom of the Bermuda Triangle.

Cotten additionally starred with De Havilland in a the film Hush… Hush Sweet Charlotte (1964), a TV Movie adaptation of The Screaming Woman (1972) and the TV Series, The Love Boat (1977-87). For this blogathon, I’d initially watched the second of those three joint acting ventures. As I hoped to compare this TV Movie adaptation of The Screaming Woman with the original story – in a (later) TV Series – of this Ray Bradbury tale (as reviewed here).

Sadly though after watching this particular film, I noted that Cotten appeared in two short but effective scenes and these scenes (and film) dominated by top billing, Ms De Havilland. So I’m putting this film review on hold, should her yearly blogathon return next year. Darlin’ Husband then recommended I review Soylent Green (1973), but Cotten was on and off the screen before I put pen to paper. Much to my (now) growing frustration.

Then I noticed to my delight that this actor had the claim to fame of acting in two of Alfred Hitchcock’s movies – Shadow of a Doubt (1943) and Under Capricorn (1949) – and three episodes of the TV Series, Alfred Hitchcock Presents. These episodes listed as Dead Weight (1959), Together (1958) and Breakdown (1955). I chose to review their final TV collaboration with Cotten getting top billing (and I hoped this meant more screen time.)

The TV Series Alfred Hitchcock Presents (1955-62) dramatised tales of crime, mystery and suspense and ran for 10 years in half hourly episodes. All sporting a wee opening and ending segment from Hitchcock himself. The show had an easily recognisable title sequence and theme tune of Charles Gounod‘s Funeral March of a Marionette. Other actors and actresses starring in this series included Robert Vaughn, Vincent Price, Robert Redford, Steve McQueen, Barbara Bel Geddes and of course our man of the moment, Joseph Cotten.

Dead Weight’s wee intro featured Hitchcock surrounded by car signs. Opening the show with his catchphrase “Good Evening” and adding a totally random intro directed to all those who drive;

The road signs became so dense that I had to abandon my automobile and proceed on foot. I do hope the time never comes when billboard will obscure this lovely scenery. Actually, I believe these are seedling signs. This is where the Highway Department grows them. You are probably more familiar with the wild variety that springs up along the roadside.

Then adding their wee connection to the tale. As Hitchcock stresses the “tenuous” link to the story is that a car is included in this story! Then those opening credits rolled..

Cotten stars as a rich and successful, middle class advertising executive, Courtney (Nesbitt) Masterson, seen in the first scene at Lovers Lane with his girlfriend Peg (Julie Adams), They are snogging passionately. Suddenly a torch is shone in her face. The pair are startled by a man (Rudy) in the shadow pointing a gun at them. Masterson tries to reason with him but he and Peg asked to leave the car and hand over the car keys. They comply.

Masterson is then mocked by the thief about his name and age as Rudy makes menacing and sinister small talk. Masterson and Peg bargain with Rudy with both saying they are happy if he takes their money. Adding if he takes their cash they’ll even “forget” about the incident. Masterson is then asked to take his belongings out the car boot (trunk) and then climb in there. Peg screams, as Masterson jumps forwards Rudy and then overpowers him. Rudy has a knife but now Masterson has the advantage pointing the gun in Rudy’s face. Masterson orders the thief to lie in the boot. Rudy is terrified and tries to make light of his earlier actions. He then threatens Masterson, saying he wont forget the incident.

After this man is locked in the car boot, Peg is shaken and in tears, Masterson consoles and kisses her. Masterson says he’ll take Rudy to the police station. But Peg’s concerned the incident will make the newspapers. And that Masterson’s wife will read the story…and their affair revealed. En route, a motorcycle cop pulls them over for a flat tyre. Masterson doesn’t say anything to the cop about the incident, making Peg angry with him. Masterson appears more concerned with his wife finding out about their affair, than what has happened.

Masterson appears more and more panicky at being discovered as an unfaithful husband. This especially with Rudy knowing his name and with those threats he made. So what to do with Rudy? Masterson runs through the possibilities with Peg. Murder is discussed. And cover stories are suggested that won’t involve Peg. Masterson drops the still shaken but angry Peg at her home. Then he immediately returns to Lovers Lane and opens the boot. And if these moments of suspense have got you on the edge of the seat, I urge you to watch those remaining twists and turns in this episode until the Master of Suspense returns for his final words…

This was a story filled with ominous moments of uncertainty throughout, with Masterson’s marriage the tip of the iceberg. Cotten was able to show many different sides to Masterson’s complex character and personality and how these factors affected his motivations. With him initially appearing the romantic hero (albeit in an extra marital affair) to him appearing more cowardly in his actions when he remembered he was married. Cowardly, as he did not disclose the incident with Rudy to the motorcycle cop and that he hoped to cover up Peg’s part in the story.

Masterson’s initial lawful and more honest character changed for the worst. He appeared keen to save his marriage and keep his outward, professional appearance intact.  Whatever the cost.  This heard in his voice he spoke about the alternative ways of the “Rudy problem”. This with a believable performance from Cotten as a man whose extra marital affair was on the verge of being discovered when the truth came out.

Cotten and Adams were able to show a tough but caring and romantic attributes then showed Masterson and Peg as having a more disturbing side to their personalities. The pair believing it might have been better to kill Rudy, and lie about her involvement in the tale. This as a more favourable alternative to Masterson discovered as a cheating husband and her implicated as a home breaker. However, I understood and emphasised with Peg’s angry reaction with him more concerned of those legal repercussions in his marriage and career, claiming he was “always cautious, safe, and respectable”. To her (and me), his later behaviours an indication of how serious he was in their relationship. With Peg appearing still angry (in this her final scene), the fate of their affair left on an ambiguous note.

Observing Cotten’s multi layered performance, it was easy to see why Hitchcock worked together with so often with him in this kind of role. Cotten proving himself as a versatile actor who could switch his emotions and behaviour in moments and without any difficulties. These attributes to be seen to full effect in those crucial and tense remaining scenes.

To conclude before this blogathon, Joseph Cotten, was an actor that I’ve only now cottoned on as being in a flying appearance in Airport 77 (1977) with his oft acting companion Olivia De Havilland. But now I’m convinced that beyond a Shadow of a Doubt, it’s worthwhile checking out those thrilling films and TV when Alfred Hitchcock introduces Joseph Cotten, an actor now to me no longer just a shot in the dark.

Bonus Trailer: A Tribute to Cotten

This film review was added to In the Good Old Days of Classic Hollywood and Maddy Loves Her Classic Films Joseph Cotten Blogathon. To date I have only reviewed Cotten in Airport 77 . Other series reviews which starred Joseph Cotten include Fantasy Island and The Love Boat. Also appearing in Alfred Hitchcock Presents were Dick York (Bewitched) ,  Robert Vaughn (The Towering Inferno), Vincent Price (Asylum and Dracula 1972 AD), Steve McQueen (The Towering Inferno and The Thomas Crown Affair) and Barbara Bel Geddes (Dallas). This particular episode was directed by Stuart Rosenberg whose film Voyage of the Damned was reviewed HERE. Julie Adams starred in Murder She Wrote and Don Gordon starred in The Dukes of Hazzard and The Towering Inferno.