Transporting you back to a Truly Scrumptious Musical…

A Children’s film which will drive you to distraction with James Bond connections.

Today it’s time for a British film musical with probably as many connections to James Bond, as Linda Gray has to The Two Worlds of Jennie Logan (1979). Behind the scenes,  Chitty Chitty Bang Bang (2008) is the film based on the book by Ian Fleming, the man who wrote James Bond.

The to be reviewed film’s screenplay was written by Roald Dahl who was the Bond screenwriter for You Only Live Twice (1967) (As noted by Darlin’ Husband). Also, it’s produced by the man who co-produced Bond, Albert R. Broccoli. Almost completing the Bond connection, actor Gert Frobe starred as Baron Bomburst, one of the villains in this film to be reviewed starred as the bad guy in Goldfinger (1964).

Last but possibly not least, Anna Quayle playing Frobe’s screen wife was in Casino Royale (1967), this was the Bond films film parody. This parody should not to be confused with the film that sounds like a Bond film with Val Kilmer and Robert Downey Jnr Kiss Kiss Bang Bang (2001).

All these Bond connections adding up to much-loved, much-watched children’s musical film. A musical which only surprisingly made it in Broadway and the West End decades later. Today it’s the 1968 film version in the limelight.

Set in 1910, two wee kids Jeremy (Adrian Hall) and Jemina (Heather Ripley) fall in love with an old banger of a racing car in the local junkyard. This car won a few races in its heyday and now is doomed for scrap. The kids live with their widowed father and grandfather (Lionel Jeffries) in the coolest house of the film world.

Their father Caractacus Potts (Dick Van Dyke) is an inventor of wonderful but useless things. He has inventions for anything and everything. He would probably have been, in a different film reality, the millionaire who invented the Candy Floss maker if some smart arse hadn’t got there first (in 1897).

Despite the kids playing truant from school and him getting an earful about this from the well-meaning but pretty busybody, Truly Scrumptious (Sally Anne Howes), Caractacus (Van Dyke), says he’ll buy them the car. Caractacus goes to the carnival to raise money for the car.

This bit of the film is easily skippable. He then restores the car to its former glory, and pretty jazzy it is too. Cue singing about this car by his angelic children with Van Dyke. Chitty Chitty Bang Bang their name for the car due to the noises it makes. On trying to sell his latest invention, a sweet that can double as a whistle, Caractacus remeets and bonds Truly Scrumptious and meets her father, Lord Scrumptious.

The Lord is owner of the local sweet factory. He’s played by a blustering British James Robertson Justice (who bellowed What’s the bleeding time? in those Doctor in the House movies with more of that story HERE). Cue lots of singing and dancing.

We discover he invented dog sweets (by accident). Much hilarity (for some) as dozens of dog extras appear running havoc around the factory. Then Robertson Justice bellows again. Sadly the dogs don’t appear before the ensemble cast and extras sing Toot Sweets.

On a family trip to the beach with Truly in tow, Caractacus tells a story about the fictional country of Vulgaria. This after the kids, at their most angelic have cornered Truly to tell them – looking all sweet and innocent – how much they love her.

This is in the Truly Scrumptious (read Truly Nauseating) song. Aw, thus hinting heavily that their father needs a wife and they need a mother. But preferably one who will own a sweetie factory one day.

Their father tells the tale of the evil Baron Bomburst (Frobe) who rules the country of Vulgaria. He wants to steal Chitty for his own. As he tells the story, Caractacus’ father is kidnapped (when in the family’s outside toilet) and taken to Vulgaria.  This in a case of mistaken identity as the bad guys think he’s Caractacus. As Jeffries one year younger than Van Dyke, it’s an easy mistake to make. They take him to Vulgaria as the Baron wants him to build him a car, pimped up just like Chitty.

Vulgaria a place initially seen as having no children or happiness, but later seen as having a dungeon full of the little mites. The four set off to rescue their grandfather in Chitty. The car can float and fly (and all this pre-Grease (1978)). There’s more than a wee bit of obvious romantic chemistry with Caractacus and Truly. But I’ll let you enjoy the rest of this children’s film…

The film divided the critics with Roger Ebert and Leonard Maltin giving opposing views on it. Ebert said

…a marvelous magical auto and lots of adventure and a nutty old grandpa and a mean Baron and some funny dances and a couple of [scary] moments..

with Maltin believing more cynically that the film was;

..one big Edsel, with totally forgettable score and some of the shoddiest special effects ever…

There are lots of memorable tunes from Sherman and Sherman, who also penned Van Dyke’s lyrics in Mary Poppins (1964). Most memorable being the titular track and Howes’ A Lovely Lonely Man which is the stuff which ballads are made of. This is one of my favourite songs from the film.

It also boasts the more remembered – for all the wrong reasons – song Chu Chi Face, The song is sung by Frobe and the actress playing Bomburst’s dolly bird wife, Quayle. But to me it’s the lovely Howes song I love the most in a lovely, sweet performance from Howes.

This film is full of musical surprises of all sorts. I read about Phil Collins, yes that man from Genesis and oft actor in Buster(1988). Collins had – reportedly – a role in this movie but had, had what would have been his debut part cut. He claiming this was due to a bandage on his head. But doing the research it seems he was 17 going on 18 when he took the role and sadly his part has not been discovered on the cutting room floor (yet!)

I also discovered that Julie Andrews had been offered the role of Truly Scrumptious but turned it down, this part then role going to Howes. I am glad of this move (thanks Julie) as sometimes you just wouldn’t want to see a reunion of actors on-screen (no matter how good their acting or singing is).

This is why I don’t relish the idea of that On Golden Pond (1981) remake with Julie Andrews (again.)  And I’m just as happy – also for this reason – she didn’t take up that Nanette Newman role in Plummer’s International Velvet (1978), Dick Van Dyke turned down Oliver (1968) for this part when he was offered the role of Fagin. But luckily that Cockney’s accented role went to Ron Moody.

Now for those still off a delicate disposition, I’ll move onto the stuff of nightmares in this film tale. But I’m not talking that awful broom song Caractacus sings at the fair, Me ‘Ol Bam Boo (just yet). The children’s film includes the infamous child catcher scene. This character was a villain played by a ballet dancer (which makes it kinda less scary).

This one of the supercreepiest people in TV and film, until all revealed regarding a few certain Radio DJ and seventies Children’s TV presenters. To this day his part in the film remains untouched. But certain sites bizarrely do recommend the film for kids over 6 years old. This despite that the internet is crammed full of parents rightly concerned about this trauma – still talking child catcher here – inflicted on their more sensitive off spring.

I’d advise you send your kid out the room for the child catcher’s appearance until the powers that be find every print of this film and replace it with another. Get William Shatner on the case, as according to one site on the internet he destroyed every copy of the Incubus (1966) movie. As only one print of the film found years later, if this is true the Shatner’s your man. However if this false, try the BBC who appeared to eradicate every appearance of that DJ / Children’s TV presenter on reruns of Top of the Pops (1964-2016). There are ways!.

Then there is still that other nightmare-inducing song from those carnival scenes. Van Dyke sings of Me Ol’ Bamboo with what looks like some Morris Dancers. All with brooms. This combination leading to sleepless nights for children and adults of all ages. The song so far thankfully only covered by Granny’s’ fave Michael Ball.

This is possibly one of the most useless songs in a musical ever. But maybe the film just needs an MOT, as in re-editing this film, likes others such as that badly thought out ending of Passengers (2016). As editing, it changes everything. 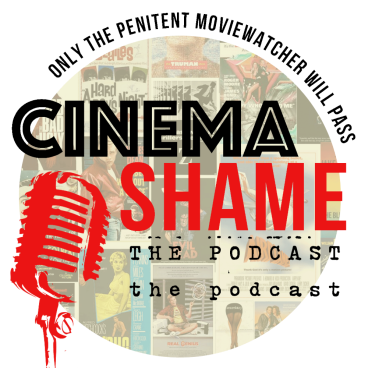 This post was added to my Cinema Shame posts for 2018. Dick Van Dyke also starred in Strong Medicine, Divorce American Style and Columbo. Lionel Jeffries starred in Lovejoy. Other kids film reviews here include The Sound of Music, The Fox and The Hound, The Slipper and the Rose and International Velvet.