My son, the hero…

Tells the story of the author Rudyard Kipling and his only son, Jack who died in battle in the early days of World War I. 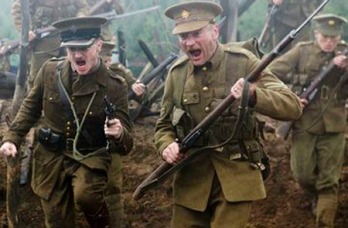 Rudyard Kipling was an author of many poems and stories of young boys in adventure tales as The Jungle Book and Kim. Rudyard’s most poignant and heartfelt tale, based on his true personal story was told in the poem My Boy Jack.

This poem was believed to be a cathartic poem telling of the loss of his only son Jack in World War I. The film My Boy Jack (2007), tells the story of Rudyard Kipling and his family from just before his only son Jack enlists to the war to the aftermath of his death at the Battle of Loos.

As a kid in Scotland, I had studied World War I in history and English lessons at secondary school. This through what were then difficult to remember facts and figures such as battles and dates in the former, and the Great War Poets, Siegfried Sassoon and Wilfred Owen, in the latter. The Great War poems made much more impact on me, with many with their author’s true tales in rhyme.

Fast-forward a few years, and I watched Shadowlands (1993), the story of C S Lewis (Anthony Hopkins), and his love for the American poet Joy Gresham (Debra Winger). This one of the first true biopics I remember that made an impression on me (but there were no doubt more) in this tale of Lewis’ love and loss of his beloved Joy to illness. Again this film was based on a true story got my interest.

Since then, I’ve lived, loved, laughed and at times lost with many a real-life scientist, inventor, actor or actress through this particular film and TV genre. I’ve celebrated the subject’s highs, been saddened by their lows in their life stories. But always taking note of that it is based on a true story.

The films often led to subsequent searches to find out all the facts. This true for the world of film and TV true biopics about Beatrix Potter (Miss Potter (2006)) to Judy Garland (Life with Judy Garland: Me and My Shadows (2001)) and films about (and titled) Ed Wood (1994) to Eddie the Eagle (2015).

Without a doubt, this my favourite genre both on-screen and in books, be it autobiography or biographical tributes.  My Darlin Husband brought my love of history and these films by suggesting I review this TV Movie. The film based on a true story that I hadn’t heard before. In this TV Movie, the actor David Haig brings to life on the wee screen adaptation of his 1997 play based on this true story.

It starts in England in 1914 with two simultaneous stories of the Kipling men, Rudyard (Haig) and his son Jack (Daniel Radcliffe). Rudyard visiting the then King George V. The pair jovially celebrating his quick journey time from his home to Windsor as timed by the King.

The pair briefly exchange news on their sons. The King is aware of Kipling’s passionate anti-German feelings. Kipling has strong concerns that Britain will be invaded by Germany.

Meanwhile, Jack hopes to join the British Navy to fight the Germans. His interviewer telling Jack that he is a fan of his father’s books. Jack who wears spectacles for his poor eyesight, struggles without his spectacles at the eye test.

However, Jack is turned down for the Navy as he is severely short-sighted. This news riling his father, who has strong anti-German feelings. He believes that anyone who is keen to fight for his country should. Rudyard sharing his views and fears through propaganda and public speeches.

Undeterred – yet devastated – by his recent failed interview, Jack then hopes to join the army. But this on his own terms and not due to his father’s fame or influence. Again his bad eyesight lets him down. The interviewer reporting concerns for both his and others lives in battle. After his father pulls a few strings, Jack is accepted for an officer’s commission as a Second Lieutenant in the Irish Guards.

Her son’s commission upsets his mother Carrie, (Kipling’s wife) (Kim Cattrall) and young sister Elsie (Corey Mulligan). Elsie believes Jack is being unduly coerced by their father, Carrie is concerned due to Jack’s young age as he is only 17. Due to his young age, he has to request his father’s approval to go to war. Rudyard agreed to this.

The women are also concerned due to Jack’s eyesight difficulties. It’s revealed that the family was once five, with a daughter passed away. Jack has a closer relationship with his sister. In a scene with the siblings, Jack confiding he hopes for adventure away from the stifling atmosphere in the family home.

After he joins the troops,  Jack proves himself a worthy soldier, shown in his dedication and determination during training. In charge of his platoon, he proves supportive and emphatic to his men’s needs and he is a strong leader.  After a short time, he is deployed to France,  where he leads his men at the battle at Loos.

Sadly, the day after his birthday celebrations with his men, Jack is reported as missing in action after leading his platoon into battle. The family are informed of this news in a telegram. The Kipling family are left to piece together Jack’s moments in this battle.

Over three years the family hope against hope, as they contact hospitals, interview his colleagues and others in vainas they hope that Jack is still alive. They piece together his movements. On interviewing one of the Irish Guards he was stationed with in battle, the family learn the sad details of Jack heroic death. Its told how Jack lost his spectacles in the mud at Loos. He was shot by enemy gunfire.

This tale culminating with Haig reciting Kipling’s poem, My Boy Jack. This in a retelling of the initial scene where Rudyard and King George V meet. However here the pair unite in the grief of their losses. Both now reporting both their sons passing away at a young age. This seen in sharp contrast to their initial scenes of the movie.

This film was respectfully and touchingly played by this small cast. Firstly those actresses, As Carrie, Kim Cattrall, an actress I’m familiar with through her roles as the love interest in 80s movies and her small role in a Star Trek film. Cattrall showed a sweet, supportive and emphatic maternal performance.

Mulligan played her role as Elsie showing her views from a young girl losing her only sibling. Her anger at her father and the situation credible and believably played in this early a film role for this actress.

Special mention goes to the actors in this cast. For me – dare I say it as not a big fan of that Harry Potter franchise – Radcliffe shook this his most famous role off his shoulders for good. This with his excellent acting and his natural performance which I believe is the best I’ve seen from him.

He made me believe in his character, and see him as a young man, soldier, brother and son in this a clear departure from that fantasy film series. His chemistry with all the cast was evident and he showed an instinctive performance. His scenes with Mulligan tender and his final scenes showing Jack Kipling’s death were respectfully acted and heartbreaking to watch knowing the outcome.

Haig, who I’d only seen in a comic role in Four Weddings and a Funeral  (1994) showed us the different sides to Rudyard Kipling. At his most inspiring in his impassioned speeches, to his pride of his son as he agrees to him leaving for battle in Loos. He excelled in a final and tragic performance later in the film as Kipling accepted his loss, after hearing of Jack’s last movements.

Haig’s recital of the poem in the final scene was heartrendingly delivered. This all the more poignant knowing Kipling was one of many, many fathers in many, many families and this a familiar tale to others worldwide. All the supporting actors to this cast gave strong performances in this true story.

Both Sassoon and Owen had made a lasting impression on my younger self in their poetry. I feel my studies would have made a greater impact had Kipling’s poetic tribute in My Boy Jack had also been included in that list of World War I poets. Then Kipling was an author that my then younger childhood self would have recalled from clips seen from The Jungle Book (1967) movie.

This film showing that individuals can be affected by wars, be it in families with all sorts from different views and beliefs, backgrounds and from different countries. Within this movie, this family showing feelings and experiences echoed by other families. The Kiplings seen as a family at war with each other with their opposing views on the battle, which this film illustrates so effectively. This through a son’s hopes for adventure, a father’s pride, a mother’s fears and a sister’s anger.. that although wars mean different things to different people, we are all united in grief.

This TV Movie was reviewed for Maddy Loves Her Classic Films The World War One on Film Blogathon. Other reviews with this cast include David Haig in Four Weddings and a Funeral. Kim Cattrall is reviewed in Mannequin and Star Trek VI The Undiscovered Country. Corey Mulligan appears in my post for The Great Gatsby.