Linda Daniel has a night to remember…

After a children’s art teacher becomes involved in a murder as a syndicate hitman on her trail is determined to kill her. 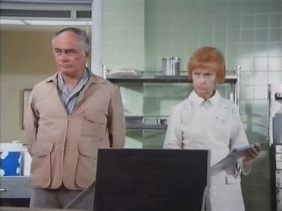 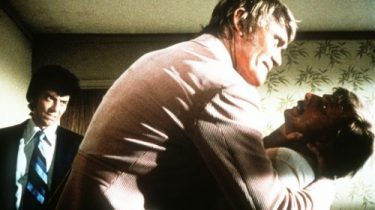 In one of her last appearances in film and TV, Agnes Moorehead played a small but pivotal role in the TV Movie, Night of Terror (1972). She starred here alongside character actor, Martin Balsam and the Queen of TV Movies, soap operas and 1970s and 1980s guest star roles, Donna Mills.

Mills appears in one of her many “woman in peril” roles in this chilling cat and mouse thriller. Before you think this film could have a predictable romance, with Mills as the detective assigned to protect her. He’s played by much older Martin Balsam, and he only gets as far as giving her a foot rub or two (or three or more).

Mills’ character couldn’t have had better help from the police, with Eddie Egan in this role. Egan was a real-life police officer turned actor, who looking at his acting CV became kind of typecast in playing cops of all ranks. Interestingly he was the real-life inspiration for the leading character, played by Gene Hackman, Popeye Doyle in The French Connection (1971).

The bad guy, hamming it up in a pink suit that Helmut Berger would have worn easily (had it been made of velour) in his Dorian Gray (1970) movie, Chuck Connors. Connors proving pastel pink is not really his colour, but still somehow looking convincingly menacing in this suit which he wears (in all his scenes).

The film was directed by Jeannot Szwarc who directed films as diverse as Somewhere in Time (1980) and the TV Movie The Devil’s Daughter (1973). The plot tells of an art teacher,  Linda Daniel who with her buddy Celeste Davillo (Catherine Burns) give art classes to wee kids. One day, the class overhear a confrontation outside, as Manning (John Karlen) runs towards their flat with some bad guys in pursuit.

Manning has something they want, but this item is not revealed until much later and it’s implied it’s in Celeste’s flat. Linda opens the door to see Manning being threatened by Brian DiPaulo (Connors), then the front door is closed by one of his henchmen. Then a thud is heard as Manning is hurled off the balcony to his death.

The women are then questioned by the no-nonsense, gruff cop Lt Costin (Egan). Shortly after this, Celeste tells Linda her fears, that she is being followed by DiPaulo and his acquaintances. Linda is also followed by one of DiPaulo’s henchmen as she catches a bus home. But just she thinks she has given him the slip, he follows her to a nearby car park. So she makes a run for it (with Mills proving that even wearing killer heels that she can outrun the best of them).

Celeste is beaten badly by the bad guys, and they are still in their hunt for the mystery item and trash her flat looking for it. Celeste is taken to the hospital, where Costin interrogates Celeste and Linda.  After Linda picks Celeste up from the hospital, Celeste insists on driving them, then she sees DiPaulo through the front window. She drives around the car park like a member of the Fast and Furious cast to get away from him. Then after she avoids a reversing car, their car upturns.

Linda wakes up a few weeks later and learns that Celeste died in the accident. She also discovers that she is paralysed from the waist down, but that this may be a temporary condition. One night DiPaulo – pretending to be a staff member – threatens her, with her life. But she screams and he goes away, her security guard, however, is beaten up.

On attending physiotherapy, she is helped by Bronsky (Moorehead) who teaches her new ways of doing things, such as passive foot exercises, how to do a foot rub and transferring to her wheelchair. During one physiotherapy session, these women meet the chain-smoking detective, Capt. Caleb Sark (Balsam). He has been assigned to look after Linda on her discharge. Bronsky teaches him how to give a foot rub and they talk about her aftercare.

Sark takes  Linda to his remote, beachfront home to recuperate, and his home is ideal as it has ramps and a working lift. He brings some of her home comforts including her art materials and a collage that one of her kids (made out of old tickets and wrappers) in her art class. The pair slowly bond as he tells her about his dead wife, and she encourages him not to smoke by giving her foot rubs instead (this means she gets a lot of foot rubs).

Sark gives Linda a lot of foot rubs as he tries to stop smoking and he notices Linda often draws a picture of a man (who looks like Chuck Connors). Egan reveals after checking this picture against some photofits that this man is DiPaulo.  Linda reveals to Sark she gave Sark’s address to her landlady back home.

After a few jump scares, it’s revealed by the local shopkeeper that a man (in what you can safely assume wearing a pink suit) knocked him out, after asking how to get to Sark’s place. Sark then leaves to meet up with Egan leaving Linda alone in the house. This after they discover that Manning’s kid was in her art class and his collage had a ticket on it where Manning had stored some illicit drugs…

The plot was interestingly told with a few surprises along the way. It was convincing as a thriller, despite its at times predictable plot. However, it was frustrating that the full reason for Manning’s death was not explained early in the movie.

This could have been easily explained using one of the kids who were in the art class in the opening scene making a collage, then talking about it to Celeste or Linda. Other gripes about the plot included, that there not enough scenes with Catherine Burns and Agnes Moorehead who were both underused, as was the rest of DiPaulo’s henchmen.

I loved Szwarc’s direction with the outstanding and gripping car park scene using shadows and the night time setting most effectively. Both these elements were also highly effective later in the film when Mills was left alone in Sark’s house.

I did like Donna Mills in this film, her screams and wide-eyed expressions were perfectly executed. I can see why this pretty blonde was typecast in these “women in peril” roles, this possibly after her role in Play Misty for Me (1971). She had a good and easy rapport with Balsam in their scenes together and she seemed pretty resourceful in later scenes. This made me question why Sark left this vulnerable woman alone.

Balsam was a likeable character, but did he have to give so many foot rubs? From the moment, he learned about this treatment from Bronsky where luckily (?) we were spared seeing Balsam’s feet Sark seemed to have replaced his cigarette addiction with a foot fetish.  Connors was evil personified in his bad guy role, and he seemed to relish this role.

I did like Moorehead’s physiotherapist role. She was inspiring, caring and empathetic in this part, and these attributes all you’d want in a health worker. I hoped that she would make an appearance again later in the movie, as there were plenty of opportunities to add her character’s presence, particularly in the final scene.

Failing that a confrontation between DiPaulo and Bronsky could have added to the suspense, particularly if DiPaulo had killed her character in a bid to find out Linda’s whereabouts on discharge from the hospital.

But if you’ve ever wanted to learn just how to give the perfect foot rub to help to give up smoking or just because this is the (TV) Movie that will show you just how to do it. Or if you’ve a bit of a thing about Donna Mills’ feet. I’d definitely recommend this TV thriller where Agnes Moorehead, unintentionally rubs it in how to make an appearance with a small part.

The Second Agnes Moorehead Blogathon 2020, No 28

This was added to In The Good Old Days of Classic Hollywood 2nd Agnes Moorehead Blogathon. Other film reviews with this cast include Agnes Moorehead in The Twilight Zone, Bewitched and in Charlotte’s Web. Donna Mills starred in Play Misty for Me, McMillan and Wife, The Love Boat, Fantasy Island and Knots Landing. Martin Balsam starred in posts for in Glitter, Hotel, Murder She Wrote, St. Elmo’s Fire, Murder on the Orient Express and The Twilight Zone in The Sixteen Millimeter Shrine S1 Ep4. John Karlen starred in Charlie’s Angels. Eddie Egan starred in The French Connection. Chuck Connors stars in Move Over Darling and The Horror at 37,000 Feet.