A Halloween Horror that Still Haunts Me…

An escaped inpatient murdered his older sister 15 years previously as a wee boy. It’s Halloween night, as he murders again. 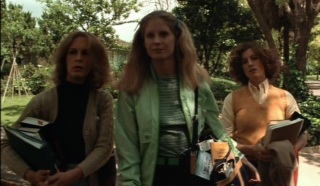 Jamie Lee Cutis and her friends

Halloween for me in Scotland in the 70s and early 80s meant going guising in scary fancy dress costumes, dooking for apples and watching lots of horror themed films and TV on the telly. With the guising and apple dooking both the Scottish Halloween terms for Trick or Treat and apple bobbing. Horror films, I remember finding more amusing than terrifying and included An American Werewolf in London (1981) and The Hand (1981).

However my review here is on Halloween (1978), the first film which really scared me, albeit on TV in the early 80s. With the frightening Halloween themed screenplay, soundtrack and interpretation on-screen all by director John Carpenter. And this on my first rewatch since then, these chilling components all instilled fear in me once more. And this more than 30 years later.

So, if you are easily scared, get a cushion big enough to hide behind, put on the lights, lock the door and shut the windows. And hope that thunder and lightning won’t make an appearance, as I tell you more of this frightening horror movie, the first in the Halloween film franchise.

An iconic haunting title soundtrack starts proceedings which I like many others recall as vividly as Tubular Bells from The Exorcist (1973). This spooky tune still gives me goosebumps on hearing it again. Continuing with pumpkin shade of orange turning to blood-red opening credits on a black as night background. These alongside an eerie looking pumpkin lantern with a sinister smiley face with its size increasing with each credit. These eerily adding to the Halloween theme. A theme prominent throughout this movie.

Our terrifying tale starts on Halloween night, 1963 and specifically in Haddonfield, Illinois, These scenes are frighteningly depicted as we view them, as it happens, chillingly as if we are this unknown person approaching the white house in the dark. We see events from their eyes as we join them outside the window – as children go trick or treating – watching a girl make out with her boyfriend, then see the pair go upstairs.

On going into the house (after checking the light goes off) we enter a dark half-lit kitchen where the light is switched on and we see a blurry hand reaching for a knife in a kitchen drawer. We wait in the shadows of the doorway until the girl’s boyfriend leaves, then we climb up the stairs. As we climb the stairs to the chimes of a clock, we hear his footsteps on the stairs. These scenes as we see them from his point of view leading to even more petrifying events.

At the top of the stairs,  we see a small arm and a hand and now eerily view events now from an eye mask’s eye holes. These scenes appear from a small child’s height, and we see a small hand with the knife as she calls him by name, Michael. Michael attacks the girl plunging a knife into her like Norman Bates in Psycho (1960). All these petrifying scenes are shown without a word or an apparent motive. We retrace our steps hurriedly as Michael, now breathing loudly and quickly as if in a panic outside, we meet a man and woman as their car arrives home.

Then in the petrifying final scene, we are no longer seeing things from his point of view As we see him instead, as the perpetrator unmasked and revealed to our disbelief and shock.  This as Michael is a small blond boy and with his parents are standing outside the house.

Michael is dressed in a clown costume and this our first sight of Michael Myers, a six-year-old child murderer, with the bloodied knife still in his hand after murdering his sister, Judith. This scene the most frighteningly haunting of this time and one that is always remembered even now.

Carpenter then introduces us to the present day (in this film) of Halloween Eve 1978, 15 years later. Dr Sam Loomis (Donald Pleasence) and a nurse are discussing Michael’s case now with his freedom, about to be debated in court. This as she drives into the grounds of mental health secure hospital that he’s resided in since that fateful night. Many of the white ghostly clothed inpatients are outside, unnerving her.

Loomis tells how he tried and failed to help Michael (Nick Castle) – now a 21-year-old man – who has remained mute since that horrifying event of 1963. After Loomis leaves the car, an inpatient breaks the window and forcibly drags the nurse from the car. This increasing your fear tenfold, due to the strength and possible intent of this man. The inpatient drives off in the car as he escapes into the stormy darkness, ending this in an eerie, foreboding way.

The next day, on Halloween, we are back in Haddonfield, where a High School girl, Laurie Strode (Jamie Lee Curtis) leaves some keys at Michael’s old home. This house now 15 years empty is due up for sale. An anonymous man watches her from the shadows inside the house and watches her talk with a young friend she is due to babysit later, Tommy (Brian Andrews).

This unknown man is heard to be breathing heavily, and this in addition to his sudden appearance, made me jump. Later, the unnamed man watches Tommy being taunted by some boys at school about his ignorance of the boogeyman. However, this man’s sudden appearance face to face with one bully scares him.

This man revealed to be the escaped inpatient and in a spine-tingling moment as Michael Myers. This revealed as Dr Loomis follows him to Haddonfield, fearing Michael may kill again. Loomis phones the police to warn them of Michael’s possible return as a body of a dead mechanic – killed by Michael – lies dead nearby. This unnoticed by Loomis, but seen by the audience in the foreground of the screen.

Michael – in this film is also billed as The Shape – watches Laurie at school, wearing a mask and appears sinisterly in the dead man’s clothes. He then follows Laurie for the remainder of her day and into Halloween night. As she walks home with her friends, at first only she notices being followed by Michael, now in the stolen car – which adds to the suspense – as we see her movements from her stalker’s perceptive. Annie then shouts at the car ridiculing him for driving slowly, with the car stopping. Then moving on. Her friends Annie (Nancy Kyes) and Lynda (P.J. Soles) and ridicule Laurie about her fears.

Michael follows the girls on foot, and with it unknown when he will appear this makes his expected appearances scarier. This on/off tension keeping you on the edge of your seat. Michael’s stalking scenes in this movie are often set up as we watch actions in these scenes in full detail. And this adding to the suspense. Carpenter throws in a few red herrings along the way. Adding to the creepiness is the silence of this man which is both terrifying and frightening.

That Halloween night, Laurie and Annie are due to babysit different kids, who live a few doors away. Laurie fondly watches small kids out trick or treating, as she sets off to babysit with a pumpkin for carving, and promises to her charge, Tommy of popcorn and movies. She sets off with Annie –  and we note Annie is the daughter of the sheriff – and their car is spookily followed by Michael by car.

As Laurie babysits, a frightened Tommy asks more about the boogeyman. Meanwhile, Loomis has visited a graveyard finding the tombstone for Michael’s sister Judith has gone missing. The Sheriff (Charles Cyphers) ominously tells Loomis a hardware store has also been broken into with a couple of knives, a rope and a mask being stolen. This as Michael’s car drives past him in pursuit of the girls behind him, in this a foreboding and frightening scene.

Loomis investigates the Myers house with the sheriff and paints the sheriff (and us) a picture of Myers as a man mute for 15 years, with no conscience or understanding, no awareness of right and wrong and the devil’s eyes. As Laurie babysits, Michael Myers is suddenly seen observing the house from afar, we then fear for the babysitters, their charges and all concerned, with Michael Myers back in Haddonfield on Halloween with murder on his mind… as the Sheriff patrols the streets, and Loomis waits by Michael’s old creepy former home…

In this film, Carpenter excels at using light in these scenes (and others including the first scene in the kitchen) or the lack of light, to terrifying effect. Horror filled scenes of Michael using silhouettes, showing the stalker from behind and his eerie masked reflection, in turn, increase the anticipation of a gruesome event. Then with some events, your pulse quickens and you are shocked as nothing happens, with horror happening more randomly. You are usually relieved for a while, but don’t let these scenes lull you into a false sense of security.

The television with a running commentary of horror movies adds to the eeriness of the soundtrack with notable films including Forbidden Planet (1956) and The Thing from Another World (1951). Just hearing the soundtrack to these in film movies along with other devices such as the telephone multiplies your fear.

Many of these Carpenter tropes have used in many scary movies since.  But on my first viewing of these terrifying setups and more frightening payoffs, these easily scared me. Particularly those initial scenes as events unfolded setting the scene for this slasher film. So I was reassured by my first watching of this film in the apparent safety of my living room rather than a cinema environment I couldn’t control.

Both with my familiar and known surroundings and the much smaller TV screen rather than a much larger screen in a dark cinema, where I can only imagine this film would have so much more terrifying to watch. So with these frightening factors adding to the Halloween theme, and then watching it on that scary ghostly and fear-filled date, now who’s afraid of Halloween?

If you dare to read more terrifying remembrances of horror films from the past….