My live and unleashed favourite dogs…

Just a few of those more famous dogs in film and TV, with a pause for a few memorable mentions. 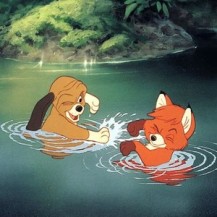 The Fox and the Hound

As Good as it Gets

When it comes to films about dogs, I have more ideas about what not to review, than to review. I’ve avoided a number of films with certain dogs since their release. This because I’ve heard that there is possibly or probably a sad ending to the tale (no dog-related pun intended).

I’m not a big fan of watching animals harmed or dying in movies – as I get nightmares easily – even if its cartoon ones. I still avoid Watership Down (1978) a cartoon film, notorious for scenes like these. However this film with rabbits. This film traumatised me as an under 10-year-old when I saw it on its release, and still does decades later.

Here are five of my favourite dogs in film and TV…

In John Wick Chapter 1 I do love this adorable wee puppy, mainly for those John Wick – puppy bonding scenes at the beginning of this film trilogy. Wick getting the puppy as a present from his wife sent to him after her death, and therefore a symbol of her love. As Wick gets on with his life you are lulled into thinking this a sad, poignant role for the bearded Keanu.

But its the death of this puppy (and the stealing of his car) at the hand of the bad guys that leads Mr Wick to return from his hitman retirement. This then turns into a first-person shooter game as he seeks revenge.  And John Wick does just that by killing the bad guys in just about every way possible.

The puppy is a beagle called Daisy which seems a surprising game for a name for a hitman’s dog, Or even one belonging to an ex-hitman or (possibly) Keanu Reeves for that matter. I  mean could you see Samuel L Jackson’s Jules Winnfield in Pulp Fiction (1994) naming a dog Daisy? No, I thought not.

Daisy was in fact played by a wee boy dog called Andy. Surprisingly, I didn’t cry when Daisy died, but at the flashbacks of Mr and Mrs Wick from their loved up days. Don’t worry having read more on Andy, no harm came to him in this movie. A prop was used to replace what US Today called the “cutest dog in the world” and combined with the big soulful eyes of Keanu Reeves they were a cute pair.

Let me take you back to 1980s UK, in EastEnders we met Roly to me a giant poodle, and the masses a Standard Poodle. Roly was the pet of the infamous Watts family. Den and Angie running the Queen Vic pub giving this dog to adopted daughter Sharon.

Looking strikingly like its original owners, Sharon (Letitia Dean) – ie poodle perm – and Angie Watts (Anita Dobson – who has a matching hairdo to her real-life partner, Brian May from Queen) I rest my case.

Roly of course was seen in that iconic scene as it was revealed that Dirty Den Watts in that major Eastenders whodunnit of the 1980s – the father of 16-year-old Michelle Fowler’s baby. Michelle was Sharon’s best girly friend.

As the rest of the world reeled in shock, we learned they’d did the deed in the Queen Vic pub. After closing time. Den at the time was married to Angie and with a mistress, Jan on the go. Hence Dirty Den.

All the clues were bloody obvious later… Michelle named the child Vicky (after where the child was conceived). Meanwhile, at school, I pocketed 50p (a lot of money back then as about 2 chocolate bars) on a bet with a school friend.

This friend had been so convinced it was Ali (the cafe owner) she’d upped the bet. And this probably Roly’s most exciting storyline, the second that he was also on the scene when one of the characters, another Queen Vic manager met a grisly end. Cue that annoying end of a show drum roll.

The Fox and the Hound – Theatrical Trailer, The Disney Animation Resource Channel

Bizarrely only recently I wrote to Keith Coogan, the then child actor who voiced the younger version of Tod the fox in The Fox and the Hound. I asked him about the film’s ending in this dog and fox bromance film. This as I missed seeing it as a kid aged 11 or 12.

Being the professional that Coogan is he didn’t tell me. This as the adult I was with – not my parents – trundled my sister and me out the cinema before the credits rolled. I still don’t know what happened to this day Yet part of me wants to know and part of me doesn’t.

The film tells the story of a fox called Tod and a hound and voiced by Coogan and Corey Feldman when they were puppy and cub respectively. Then the characters grow up to be voiced by Kurt Russell and Mickey Rooney.  This was followed by a sequel nattily named.. you guessed it The Fox and Hound 2 (2006) years later with Patrick Swayze!

This was Sunday night viewing for the Scottish masses with the talented Scottish actor Robert Carlyle. The pair as a cop and his dog fighting Scottish scum and villainy in a fictional Scottish town. Now an essential show for the Scottish patriotic ex-pat, for the scenery alone. The series filmed in Plockton and this a lovely part of Scotland. The cop’s dog a wee West Highland terrier called… Wee Jock (of course…).

This was perfect Sunday night viewing. As it’s one of those feel-good TV Shows and one with an easy to follow plot. It surprisingly has a big following over here in Finland (as does Emmerdale (1972-)), I was told by a trusted source, Wee Jock died at the end of the series, but was revived and lives again. Bizarrely I fell for this, and only discovered it a wind up when Finland’s biggest Hamish Macbeth fan looked at me like I was crazy.

More recently, a wee Griffon Bruxellois or Brussels Griffon called Jill had a pivotal part in this Oscar-winning film, As Good as it Gets. This dog was the breed that allegedly inspired George Lucas for the Ewoks in Star Wars.

In the movie, Jack Nicholson plays Melvin, a novelist with obsessive-compulsive disorder. In the opening scene, he is seen putting the dog down the trash chute. This because it peed in the hallway near his home.

Melvin is asked to look after Verdell after his owner, an artist Simon (Greg Kinnear) is beaten up and hospitalised as a kind of penance. Over time the novelist and the dog bond. This dog takes on Melvin’s symptoms such as avoiding the cracks in the pavement. On Simons discharge home, Melvin and Simon have a cute scene as they both vie for Verdell’s affections…

Finally, honorary mentions must go to the following TV dogs…

There were more Eastenders dogs such as Wellard (Well ‘ard? Get it) and Ethel’s pug dog Willie. Bouncer, a dog who had a dream leading to a full episode of his antics – from a dog perspective – in the Aussie soap Neighbours (1985-). Not forgetting those numerous Blue Peter (1958-) dogs I grew up with including Petra, Shep and Goldie.

For film dogs…There are numerous Disney ones such as, Digby: The Biggest Dog in the World (1973) – who is as the title says. Lady and the Tramp (1955) with that well-remembered spaghetti scene kiss. And famous for that clip we saw ad nauseam in Disney Time (1973) as seventies kids.

The best dog in a rom-com for me is the unnamed dog seen at the end of You’ve Got Mail (1998). Finally, can I be cheeky and add another TV show to the list of tv dogs and add The Littlest Hobo (1979-85). Why? because you’d be barking mad not to with that wonderful seventies catchy theme tune… as that dog keeps on calling me.

This post was added to Often Off Topic’s Dog Day Blogathon. Keanu Reeves stars in John Wick Chapter 1,  John Wick 2, Point Break, The Lake House and many more reviews. Keith Coogan stars in Adventures in Babysitting and Corey Feldman in The Goonies. Kurt Russell in Escape from New York, Overboard, Fast and Furious 7 and The Fate of The Furious. Jack Nicholson films include One Flew over the Cuckoos Nest, Mars Attacks and Terms of Endearment. Greg Kinnear stars in Mystery Men and in As Good as it Gets with Nicholson. Helen Hunt stars in Girls Just Want to Have Fun and Peggy Sue Got Married.