The man I loved to love…

On my love for Dallas’ JR, the misunderstood Ewing brother of the prime time soap. 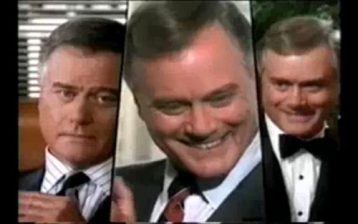 The Best of J.R. Ewing, Chris Early and photos © Lorimar

I’ll admit it, J.R. Ewing (Larry Hagman) from his days in the original series of TV’s Dallas (1978-91)was the object of my affection. Yet for the majority the man most people loved to hate. In this series, he was hated so much so he was shot 4 times in this television lifetime. I still haven’t seen the reboot so can’t tell you what happened there, but this post about his character in the original series.

Two notable culprits behind two different shootings were ex-wife Sue Ellen (Linda Gray) and her sister Kristin, who also happened to be his one time mistress. J.R. was a bit of an unlikely sex symbol for all with legions of star-struck fans, despite the fact he often kept his clothes on in the pool. He was fully clothed as he was often pushed in by little brother Bobby or another character during a fight. This being unlike Bobby – the equally attractive Man from Atlantis (1977-78) star Patrick Duffy – who was often more suitably attired with more showings of his six-pack than Jason Statham has in his career to date.

Falling for a fictional character is difficult. Firstly, let’s look at the movies. Most fall into the actor, not character category, thus eliminating Jack Nicholson (circa his One Flew over the Cuckoo’s Nest days of 1975) and Leonardo DiCaprio (from his role in The Great Gatsby (2013) and most of his roles ever since). It also discluded my then teen idol, Andrew McCarthy in practically all of his roles in Brat Pack films from Class (1983) to Fresh Horses (1988). If you click on these links for my reviews of these, do you think it shows?

So onto books, as I mainly read biographies and autobiographies these wouldn’t be eligible for this blogathon, so what about fiction? I did fancy Holden Caulfield from Catcher in the Rye (1951) as a teen, but no literary crushes since then unless you can include autobiographies in which case, Larry Hagman continued to reign from his Dallas days closely followed by Jack Nicholson if his unofficial biography is to be believed.

TV world is full of gorgeous actors, in my teens, the previously mentioned Larry Hagman, Robert Wagner and Robert Vaughn were adored from afar. I duly wrote to them, but the nearest I got to a signed photo was a return to sender from Vaughn via Hollywood. My dad tried to placate my adolescent upset by telling me the stamped envelope – still with its letter in –  was worth more money than a signed photo, but it didn’t work.  This response,  lead me to imagine the three actors sitting in a pub laughing hysterically at my youthful yearnings.

So for TV characters? Again its actors such as Philip Glenister in Life on Mars (2006-8) and Ashes to Ashes (2008-10) and Jon Hamm in Mad Men (2007-15) get my vote. Philip Glenister having the dubious honour of replacing Colin Firth on my wall for 2 consecutive years. Before you get concerned I must stress, not literally but in a calendar form.

So I then thought back to my days before I recognised characters rather than actors as a kid where I did – and still do – on and off have a bit of a screen crush on J.R. Ewing from the hit TV show Dallas.  This heartthrob – I hate to now say hunk now after hearing Rob Lowe speaking about his distaste of this expression via an audiobook clip – lasted from when I first tuned into Dallas in about 1980 through to the film spin offs to beyond.

As I mentioned earlier, I haven’t watched the sequel series yet so won’t add tales of adoration from these episodes. This is mainly because I’m scared the newish series will be rubbish despite the fact my favourite oldies, J.R, Sue Ellen and Bobby being in the show and my memories of the show tarnished forever. I admit I did watch J.R.’s funeral on the internet and sobbed along with the other members of the Ewing Clan.

More about darlin’ J.R Ewing, as the eldest son of Miss Ellie and Jock, J.R. was always wanting to impress his mummy and daddy. In all his wrongful often unethical dealings as he worked at Ewing Oil, he convinced me at least that his heart was in the right place. These dealings to impress his parents were through any means even if he had to use a bent cop, blackmail, bribery or inside information to do it.

Despite his almost cut-throat methods he always claimed he was doing things for the family even if it meant hurting them or anyone else to do this. Examples of this included contesting his father’s will, mortgaging the family home for a business deal or attempting to gain custody of his son from that lush, drunk and unfit mother Sue Ellen. So you could say he was a staunch – though unorthodox – family man.

His love for his family always justified his actions. Partly to impress his daddy he continued the family feud with the Barnes family. He did this by making life difficult for Pamela Barnes, who was now married to brother Bobby as the series began. This was usually directed towards her and her brother Cliff, although he did find an ally in step-sister Katherine.

When Pam and Bobby eventually divorced, with Katherine’s help, JR went to all lengths to keep them apart literally sending Pam on a wild goose chase and encouraging Bobby’s relationship with old flame Jenna Wade.  Little brother Bobby was the bain of his life – both in business – and at home and despite JR plotting against Bobby and undermining him on numerous occasions he cried at Bobby’s deathbed (later to be revealed as a dream). I sobbed like crazy more at his reaction to this loss than Bobby’s death.

J.R. was married three times in the original series. As the programme began he was married to Sue Ellen, a former Miss Texas, only to divorce her and then remarry her, then divorce her again before she left him for Don Lockwood. This led to more sobbing from me. But throughout the original series, you understood this couple was always meant to be together despite the fights, affairs and hurt there was always an attraction and chemistry there. They had one child, a son – and heir John Ross – and after a question about his paternity was it J.R.’s boy or Cliff Barnes’s child – J.R. was seen in many touching scenes with his son.

So what you ask what can you possibly love about a character who manipulated and swindled the masses including his family, had numerous affairs – with just about every female guest star’s role from Holly Harwood to Afton Cooper to Katherine and Kristin and sent his poor two-time wife to the bottle on numerous occasions and to the nearest mental health hospital.

Easy, it’s despite all his schemes and shenanigans, you always loved JR, his boyish looks and that certain something attracted me much more so than his brother Bobby. His misguided ways of proving his loyalty to the family and his love for his son showed him as a caring family man. Sue Ellen found the passion with him twice, and there was always a chemistry between them no matter who else they were with. But with that sexy Texan drawl, those charming blue eyes and that smile…need I say more! 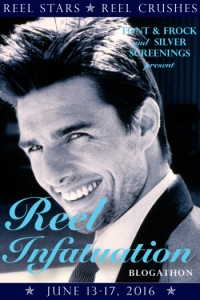 This is my post written for the Reel Infatuation blogathon run by Silver Screenings and One Track Muse. In this blogathon I wrote – well gittered about publicly – to a long term crush on the character J.R. Ewing in the original series of TV’s Dallas. More Dallas themed posts include Conundrum. Other reviews with Larry Hagman include The Return of the World’s Greatest Detective and McMillan  Affair of the Heart S6 Ep5. He also stars in Fantastic Fab Film Cameos, Superman, The Eagle Has Landed and SOB.