On Jack the Ripper, a 19th Century serial killer as referenced in Film and TV. 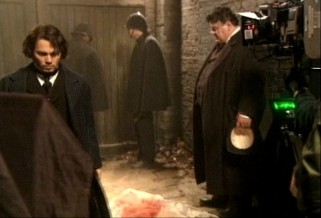 Film and TV productions have always held a somewhat macabre fascination with a turn of the 19th Century London-based serial killer known as Jack the Ripper. Jack the Ripper was a nickname for the infamous and unknown 1888 murderer – or murderers – of five prostitutes (and possibly more) in the then slum area of Whitechapel in London’s East End.

This killer was the subject of conspiracy theories to theses and the stuff of folklore to documentary. So it’s kind of inevitable that film and TV plots created over the decades made since then would add their own theories and perceptions behind this still unsolved case. With many, many suspects of the identity of this villain in both fictional and factual films and TV. Here’s just some of them…

With one of my favourite film pairings, we have the always fabulous Christopher Plummer as Sherlock Holmes and James Mason as Dr Watson investigating these heinous crimes. And interestingly these leading actors were cast after the first choice of Lawrence Olivier and Peter O’Toole didn’t happen. Others in this cast including Donald Sutherland and Anthony Quayle. In a natty wee twist, Plummer is Nigel Bruce’s cousin with Bruce having played Watson opposite Basil Rathbone’s Sherlock Holmes in a number of movies.

This the second of two Ripper films featuring Conan Doyle’s famous sleuths after A Study in Terror (1965). Holmes and Watson investigating a number of thinly disguised familiar suspects but with some under different names. And looking more fully into those Masonic and Royal related conspiracy theories around the killings. It was interesting to read that the detective who inspired this film detective was actually consulted on these unsolved murders.

In 1988, 100 years after these murders, this controversial series was televised. Watching this particular two-part TV Movie fueled a short-term interest for me in these murders, and I remember reading many books and watching related film and TV dramas after seeing this. And hearing my father’s theories on these crimes.

This TV Movie was based on a popular but discredited conspiracy theory involving the Royal family- The case investigated by the real-life Detective Abberline (Michael Caine) and Sergeant Godley (Lewis Collins). Their choice of Ripper suspects, with their names changed protecting the innocent were lined up, incriminated and then discounted in this whodunnit.

With four alternative endings shot, with less than 10 people knowing the big reveal. It seemed a more closely kept secret that the Who Shot JR? Dallas whodunnit of 1980. This in spite of this TV Mini Series being not exclusively historically correct. it was must watch TV with Caine and a wonderful all-star British supporting cast including Jane Seymour and Susan George.

This one I’ve not seen but I’ve read about, but it’s now one on the to watch list from this trailer alone. Malcolm MacDowall is HG Wells, inventor of the Time Machine. Well’s friend a Doctor John Leslie Stevenson (David Warner) uses the time machine to go forward in time to evade the police, as he is believed to be Jack the Ripper after some bloody gloves are found.

Wells then goes forward in time in the Time Machine to San Fransisco in the 1970s to catch him. Now with both men in 1979, there’s romance for Wells in the form of the lovely Mary Steenbergen and a culture shock for both of them. And judging from the trailer it looks 1970s fun and funky fictional take. Others considered for this movie included Richard Dreyfuss and Sally Field.

This film, I feel could have been even more interesting had this been a TV Series episode with Wells teamed up with Michael Douglas’ cop in The Streets of San Francisco (1972). Making it an even more random fictional take on this theme. This movie was nominated for and won many Saturn Awards. A remake of this series made in 2016, which just doesn’t sound or look as enticing with Wells going forward to 2017. And proved with this series being cancelled after 5 episodes.

And what d’ya know even Johnny Depp was in a movie on Jack the Ripper. Supported by Heather Graham as Mary Kelly – one of the Ripper’s true life victims. And this expanding on the Annie Crook and Freemason theory. After Crook’s kidnap, a number of prostitutes are killed one by one. With the unlikely acting double act of the real life Detective Abberline now played by Depp and Robbie Coltrane as Sergeant Godley investigating these murders. Here these point to a Freemason cover up.

But here (dare I say in Hollywood style) there’s an unlikely romance between Abberline and Mary Kelly. And there’s even more bizarre scenes and storylines. Others considered for Abberline included Jude Law and Sean Connery.

As for other pop culture references, Jack the Ripper’s story has been directed as a thriller by Hitchcock in The Lodger (1927) to a Hammer production of the same story in Room to Let (1950).  Films also including Jack the Ripper as a character made with film casts including anyone and everyone from Peter O’ Toole to James Spader and Faye Dunaway to Angharad Rees. But the craziest theory of the killer’s identity comes from the film Amazon Women on the Moon (1987) who identified the Ripper as the Loch Ness Monster in a Film parody of these murders.

Alluding to these crimes, there’s also been TV references in the form of a Fantasy Island episode named  With Affection, Jack the Ripper (1980) and David Hasselhoff in a TV Movie called Terror at London Bridge. (1985) And there’s been episodes of The Twilight Zone, in an episode called The New Exhibit and the Star Trek episode Wolf in the Fold, both with a Jack the Ripper twist.

Yet historically, we’re still no closer to discovering the Ripper’s identity 130 years later. With the number of possible suspects in as many film and TV adaptations. The real crime is someone somewhere, may just have stumbled on the Ripper’s true motives or unmasked their identity from those usual – or unusual – suspects. But we will never know for sure whose theory is the right one, so Jack the Ripper has literally got away with murder.

This post was written for Redjack’s Jack the Ripper Blogathon. Other posts with this cast include Michael Caine in The Wrong Box, Sleuth, X, Y and Zee and more.  James Mason in Heaven Can Wait and Yellowbeard. Christopher Plummer in 5 Golden Hollywood Greats, The Lake House and more.  Johnny Depp stars in Sweeney Todd. David Warner in Star Trek VI The Undiscovered Country and The Man with Two Brains. Malcolm McDowell stars in Voyage of the Damned. David Warner stars in Hart to Hart, The Omen and The Man with Two Brains.