5 Child Actors who stole the movie…

Do work with some kids, they might just surprise you with an Oscar win. 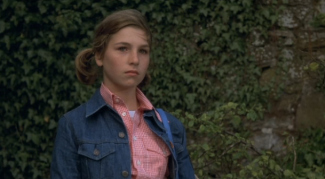 You may be aware of these films and possibly have noticed the performances from the young ‘uns involved.  4 out of 5 of these films have been reviewed previously – and more can be found about these movies if you click on the title – the exceptions being those films discussed at number 5.

However, all these wee actors and actresses do deserve special recognition for giving just as good if not better performances than their adult co-stars. Surprisingly only one kid won an Oscar nomination for their film, but if there was an Oscar for a children’s performance, then these (then) kids should have been at least nominated for their natural, refreshing performances.

With two now-famous actors playing brothers, as a much younger Josh Brolin as Brad plays the big brother for Mikey (Sean Astin). Mikey with his buddies set off to find some treasure. The kids hope that if they find the loot they can raise the money and save their homes from being demolished to make a golf course.

This film could have been a nightmare with many precocious kids trying for the limelight, as I’m sure it would have been full of tears and tantrums in the audition stages. But it’s not, it comes over that the kids were not budding thespian types, they genuinely seem to have got on well. Their teamwork was evident as was rapport and camaraderie between them throughout the movie. But of course, I could be wrong.

Still,  much later Austin went on a much longer adventure over three films, starting with the Lord of the Rings: Fellowship of the Rings (2001) film… and Stranger Things (2016-). Jonathan Ke Quan who played Data moved on to Indiana Jones and the Temple of Doom (1984) as Short Round.  Corey Feldman went on to The Lost Boys (1987) and Jeff Cohen who played Chunk also starred in the Family Ties TV series (1982-89) with Michael J Fox.

Foy acted her socks off as Murphy, the daughter of everyone’s favourite Texan in the film in the sci-fi great Interstellar (2014). The story tells about an astronaut turned farmer who returned to being an astronaut (as you do), as Cooper (Matthew McConaughey) leaves his daughter and son. This to investigate new planets to ensure the future of humanity.

Foy had me almost in tears when Cooper left to save the world and I hoped that she’d stow away with him on the rocket when the film shifted gear. Sadly, Cooper took Amelia Brand, but I hoped he would have taken Murphy. Firstly, Murphy would have been more interesting to watch as a kid’s view on space would have been more original.

And secondly, the premise of Brand being his potential love interest was a horrifying prospect. Foy was around 12 years old at the time of filming and may be familiar to those of you who like Twilight, and those of you who don’t – like me – in roles for her first role in Flashforward  (2009).

While Dustin Hoffman and Meryl Streep battled out their divorce (and for an Oscar) in Kramer vs Kramer (1979), little Justin Henry stole the show with his acting winning an Oscar Nomination of his own for this his first acting role.

The film tells of how Joanna (Streep) leaves her husband Ted (Hoffman) and her child Billy (Henry) to find herself, and the father/son relationship deepens. Joanna comes back wanting custody of her child. Henry was great in this film appearing to be a wee natural actor. He was not fazed at all by his more famous co-stars.

But my mother’s maternal instinct for him came out for this film and perhaps this won him a few Oscar votes. After Kramer vs Kramer Henry went on to star in Fantasy Island and later played Molly Ringwald’s annoying kid brother in Sixteen Candles (1984).

In International Velvet (1978), Tatum acted as Sarah Brown, niece of Velvet Brown. Velvet won the Grand National as a teen (in the prequel) but couldn’t accept the award. In this sequel which also can be seen as a stand alone film, we meet her niece, Sarah. Sarah is an equally horse crazy lass who hopes to make her way to the Olympics.

O’Neal plays Sarah throughout the film and did her own horsey stuff. She was fantastic in this movie, for which I always remember her despite sitting through her Oscar-winning turn in Paper Moon (1973) for which she won Best Supporting Actress at the age of 6. I always remember her final scene in International Velvet with Christopher Plummer as it gets me in tears every time.

In Terms of Endearment (1983) the two actress leads were nominated for an Oscar with Shirley MacLaine winning. Jack Nicholson also won for his all too brief appearance. However, it was young Huckleberry Fox – the younger kid in the above scene – who should have got more than a mention.

His performance as Debra Winger´s youngest son was credible and moving and definitely deserved an accolade or two. This acting kid also tugged at your maternal feelings in Misunderstood 1984). Here he played Gene Hackman’s on-screen son, in this another film that made you cry.

If any of the cast of Terms of Endearment read this article, can you please answer this question – which has haunted my mother and many others for years – how did you get him in tears?