On Stan Lee and the whole Marvel thing…

Stan Lee and his contribution from his teens to his death just three years ago to this Marvel-lous legacy and much, much more. 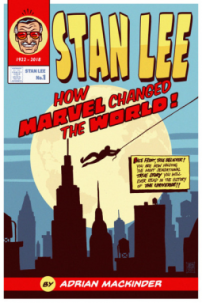 To many, Stan Lee was the elderly, enigmatic, spectacled gent that appeared in many film cameos in the Marvel movies. His countless appearances were then seen in these comic book themed films after this film genre made a return to the cinema screen with Iron Man (2008). But this was not the start of his story and 10 years later, he would pass away leaving a highly successful comic book film interconnected universe with even more to come.

Who was Stan Lee?  When did his life in comic books begin? What was his contribution to Marvel? What made the superheroes he created more human? These and other questions needed answers, especially with a stepdude who is obsessed with anything and everything superheroes. If you call Hawkeye, “the dude with the bow and arrow” it doesn’t really get you Brownie points. Really it doesn’t.

After seeing Adrian Mackinder’s attractive cartoon themed book cover and the title of Stan Lee How Marvel Changed The World, I was hooked immediately. Mackinder’s book was discovered to be a warm and affectionate tribute to all things Marvel, comic books and Stan Lee. In his passionate and engaging book, you can tell this is a subject he adores.

Mackinder’s enthusiasm for these subjects is felt in every page of the sixteen chapters and 171 pages (not counting his references). The chapters in this book have inviting titles such as Worlds of Pure Imagination, The Oldest Paperboy in Town and The Heroes We Need. All the chapters of this book blend the then historical events, the history of comic books and Stan’s life over the many, many decades he worked in this industry.

As you’ll discover the loyal Lee, was always the one “constant” in the Marvel story. Mackinder writes about Lee’s contributions from when he joined the comic book industry in the mid-1930s until his death in his early nineties in 2018. The book tells of his triumphant moments, such as the rise of Marvel Studio’s movies and his more challenging times when comic books were in decline and Marvel was in bankruptcy.

Often Mackinder tells about events where Stan Lee and his colleagues have different views on a  subject matter. These opposing versions of the truth add to the enigma that was Stan Lee. As Mackinder states many of these contributors to this overall story have passed away, and now we can never know the truth. However, Kinder explores all sides of the story. Mackinder relays them in a non-judgmental way, without taking anyone side and tells their unique story.

This author doesn’t debunk the myths that surround this enigmatic creator but shares a more rounded story of the sometimes conflicting truths. In his well-researched book, Mackinder’s supports his writing by adding information gleaned from Stan Lee’s recorded interviews, conversations from those who worked with Stan Lee, the abundant literature around this subject and Stan Lee’s autobiographies.

This book examines how Marvel became the most “successful franchise of all the time”. Mackinder argues for all of us, that Marvel made us care about their superheroes, by telling us where came from before they became who “they were destined to be” in their richly told origin stories. Their stories also often brought in other members of the Marvel universe. These characters were often seen in those wonderful after the credits scenes in Marvel films.

Mackinder describes the story of Lee’s life as “the embodiment of the American dream”. Lee’s origin story began in 1922, as the New York born son of a Romanian Jewish immigrant and a Romanian Jewish American. Young Stanley had few friends and escaped into his imagination in books, the radio, theatre and later films. Mackinder believes these early influences helped Lee when he later creating stories for his comic book superheroes.

Lee became a professional writer in his teens and in 1935, it was the “dawn of the Golden Age of Comics”. Timely comics creator Martin Goodman had married Lee’s cousin. Mackinder leaves it open if you believe if it was nepotism or talent that got Stan a job at Timely comics in this decade. His early days with this company were as an office junior of Jack Kirby and Joe Simon. In time he became their proofreader and he reinvented himself, with the pen name, Stan Lee.

By chance, Lee was asked to write a story about Captain America. Here he showed himself as a natural and gifted storyteller. In 1941, Kirby and Simon were fired from their jobs, and the reasons for this are conflicting when told by the parties involved. Also, it is unclear what was Stan Lee’s part in this event. Mackinder shares their views about the possible reasons for this.

Shortly after this, Lee handed in his notice at work and signed up to the US military where he worked on the Signal Corps during World War II. Mackinder writes a detailed account of those wartimes, telling of the history and significant people in Lee’s life.

After leaving the army, he returned to the comic book industry. Lee met his wife Joan in 1947, and he was married to her for nearly 60 years. The couple had one daughter and sadly a still born daughter who passed away after a few days of life.

Over the following decades, Lee changed his comic book plots accordingly to the times he was living in. Lee also gave his superheroes vulnerabilities and these made them more human. These human traits are believed by MacKinder to be part of Lee’s strengths in his storytelling of these heroes, and this skill is reaffirmed throughout their character descriptions.

Mackinder recounts the changing emphasis on comic books and makes it relevant telling of Lee’s then contributions. For example during World War II, I learned that Lee invented a character and created fun posters to be used as training aids for the troops. His comic book characters fought the then enemies of the day. Mackinder gives vivid descriptions of the plots of those comic books he created, that will have every Marvel fan breaking open their piggy bank to spend their savings on those titles.

This book tells of Lee’s meteoric rise through the ranks of the comic book industry and of the history of his position at Marvel. It tells of the influence of Lee’s wife –  as his support for nearly sixty years -and you’ll recognise the names of key illustrators, prolific writers and comic book superheroes over the decades. Mackinder engages the reader with interesting and often surprising facts, these make it a must-have book for any superhero fan, or for their (step)mother.

The book tells how the rise of television influenced his work, and to my joy, MacKinder described those Marvel’s television shows from the seventies that I watched as a kid. It ends as it tells of his part in the still ongoing film franchise.

In his prologue, Mackinder set out “to expose the man behind the mask” and he does this fantastically in this engaging read. Mackinder suggested that “Stan Lee” a creation of his outward self, and that the real man with the intensely private alter ego was Stanley Lieber. This suggests, that perhaps Lee is like a Marvel superhero himself. Nuff said.

A disclaimer and personal thank you to NetGalley and White Owl at Pen and Sword Books for giving me an Advance Reader Copy of Stan Lee How Marvel Changed The World by Adrian Mackinder. Financial compensation was not received, however, I received a copy of this book in exchange for a fair and honest review. All opinions expressed here are my own. If you would like your book to be featured or promoted here, please drop a line to me via my Contact Me Page.