Meryl sings with a musical Bond…

Sophie has invited 3 of her mother’s old flames to her wedding..but which one will be revealed as Sophie’s father. 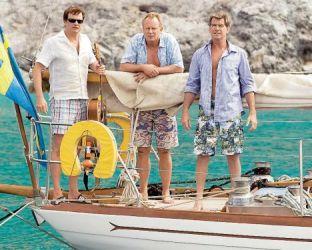 As a guilty pleasure, this is a musical rom-com movie which will appeal to ABBA fans of all ages. It stars the musically trained Meryl Streep – as my mum says you can’t go wrong with Meryl – a positively bouncy Amanda Seyfried and English national treasure, Julie Walters. Representing the menfolk are Stellan Skarsgård – the bared bottomed professor from Thor : The Dark World  (2011) – alongside Colin Firth – playing yet another stuffy Englishman – and the Irish James Bond, silver-tongued Pierce Brosnan. Avid Realweegiemidget fans will note that I’m a sucker for the Irish accent, and I’m currently typing  away listening to Liam Neeson narrating Snow Monkeys (2014) a nature programme, which could be a cure for your mother’s insomnia as he lulls her to sleep with his Irish charisma…but then Liam’s dulcet tones could read the dictionary with the same sleep inducing effect.

Anyway, the film is of course Mamma Mia (2008) and it’s a bundle of infectious fun and enthusiasm set to ABBA songs.  You can tell throughout the movie, that everyone who was in the movie enjoyed making it as it’s like a quick acting anti-depressant which brings a smile to your face minutes after watching it. Unless you hate ABBA,  romantic comedies and Colin Firth. The songs are great, the delivery exuberant but the songs aptness for the situation a bit tenuous at times. The singing is pitch perfect from Streep and Seyfried. Brosnan can’t sing for toffee, and off-set will admit to this, but no-one cares as they are having so much fun.

Also Brosnan is as ever, lovely to look at and listen to and a natural at comedy. For me he stole the show as love rival Stu in Mrs Doubtfire (1998) and I can understand why he got the girl. Allowing Brosnan to sing is a far cry from the days of The Sound of Music (1965) where poor Christopher Plummer did the vocals and then was dubbed. Brosnan’s singing alone, we Plummerites (?) are hoping will lead to the Christopher Plummer sings edition of this film. His singing can’t be that bad, surely.

The Mamma Mia plot tells of Sophie’s (Seyfried) impending wedding. She’s engaged to Skye, a terribly English surfer dude played by terribly English Dominic Cooper. Sophie has discovered from reading her mother’s diary that she could have had one of three possible fathers, Sam (Brosnan), Bill (Skarsgård) or Harry (Firth). She then invites these men to her wedding hoping she will discover her father’s identity. Sophie tells her pals a token Scot and the other one who I don’t remember much about. Cue much girly squealing.

Of course Donna ie Sophie’s mother finds out what Sophie’s done. Donna talks to her friends the OTT comic relief one Rosie, (Walters) and the toy boy hungry one, Tanya (Christine Baranski). The three women were in a girl group in the 1970s. Their girl group, appeared to only sing the more recognisable ABBA songs, that the authors of the Mamma Mia musical ABBA’s Benny and Bjorn couldn’t find a way of fitting into the story’s plot. The 3 possible fathers have a wee bit of a bonding session. And all this leads to lots of comic mayhem and even more ABBA songs..

I saw the theatrical version of this film with my mother, in the days before darlin’ husband in Edinburgh. The matinée audience was filled with women of a certain age. I think my mum and I were the youngest there and even my mum said we went to the cauliflower viewing noting all the white curly perms in the audience. After seeing the musical, it struck me that this film could have been made so much earlier, in the mid 1980s, but with Phoebe Cates in the cast.This would be based on the 1985 TV mini series Lace II  with the final song being “Which one of you bastards is my father?” But maybe Cates can’t sing, but that didn’t stop Brosman. And for that I’m grateful as with that accent alone he could sell his soul.