Playing supervillains since the 1980s…

This is the 5th of the 80s League collaborations (!) and the good news is that we’ve got a few new additions to the group. These will be added to the ever-growing list of links to podcasts and posts after this wee intro. The other news is while Dave takes a wee break, Paul Stroessner from Return to the 80s is running this month’s topic (although Dave did make the stunning pic heading this post), with Paul picking the wonderful choice of 1980s Movie Villains.

Keen readers will note I’ve  written about this theme before, then picking the wonderful Alan Rickman as Hans Gruber in Die Hard (1988). So if this film has still eluded you, along with Alan Rickman’s spellbinding and deadpan performance, CLICK HERE.

So I thought I’d find an evil performance by an American actor this time and here one stood out from the crowd,. This actor is James Spader. Spader has played more than his fair share of bad guys, especially in the 1980s. Here are just 4 of his performances from the late 1980s. But first a list of links to the new 80s League, where you can learn more about more 1980s villains through their podcasts and posts..now on with the show. 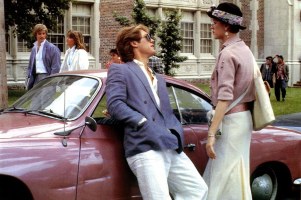 Who could forget Spader as snobby, slimy, rich Steff McKee with his dapper Miami Vice (1984-90) inspired tailored suits in this John Hughes Brat Pack classic movie. Molly Ringwald stars as Andie, literally living on the wrong side of the tracks, who dates her opposite a rich guy, Blane (McCarthy) in this against all odds romance.

Meanwhile, her best friend, Duckie is madly in love with her. On Spader’s first appearance as Steff, he makes an unwanted pass at Andie. He then becomes quite nasty to her calling her a bitch and being quite nasty as she turns him down. He’s a horrible, despicable character, with Spader appearing at his most cunning and evil as he warns Blane to stay away from her.

He even summons Blane to his home to threaten him that he will stop being friends with him if he continues to date her.  Adding that dating Andie is making Blane a laughing-stock with his well off peers. Luckily, after avoiding Andie, Blane eventually sees Steff as the cad he really is and sees the error of his ways… And that’s not the first film Spader gets punched by another character in a movie. 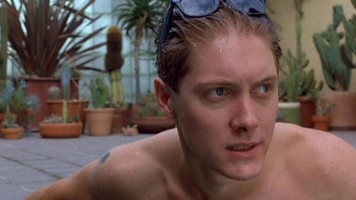 Another film with Andrew McCarthy. Here McCarthy plays Clay who goes back home and meets up with his girlfriend Blair (Jami Gertz) and best friend, Julian (Robert Downey Jnr) in his college holidays. Clay is concerned about Julian and Blair’s drug habits. Spader plays Julian and Blair’s drug dealer, chillingly named Rip. Spader slicked back his hair in this role, similar to Gordon Gekko in Wall Street (1987), which indirectly added to his character’s more evil presence. (Which incidentally was another James Spader movie from this year.)

As Julian owes Rip a substantial amount of money, Rip gets him to work as a prostitute to help pay off his debt. This is probably Spader’s most frightening of his bad guy performances in contrast to the comic evil nerd yuppie and Brat Pack douchebag roles mentioned here.  Although this film’s casting was initially panned by the book’s author – Bret Easton Ellis – it’s reported he approved of Spader’s casting as Rip in this film.

Back in the 1980s, films about babies were all the rage. Spader stars as Ken Arrenberg alongside a smart businesswoman, J.C. Wiatt (Diane Keaton) who inherits a six month baby. Spader plays her protegé and confidante, Ken. We meet him at the beginning of this movie when the pair seem to have a good relationship.

However, after she spends more and more time tending to the baby’s needs, Ken is then found working from her office, carrying out business on her phone and organising work from her intercom despite the fact J.C. still works there. He then slowly, undermines her, firstly by carrying out important paperwork that the boss needs.

He also “helps her out” and takes over her food chain business account and a major account J.C. had originally secured. Even getting her boss seeing this as a helpful gesture, resulting in Wiatt leaving for Vermont with the baby in tow. Later, she is called into her old work, she is asked to sell her business to the food chain account in a meeting with her old colleagues including an uncomfortable looking Ken. 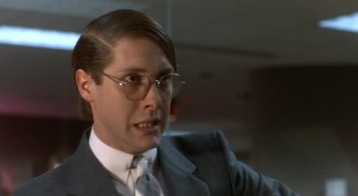 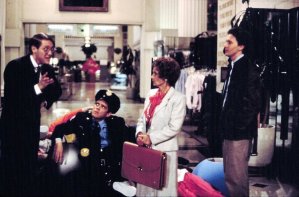 Third of three films listed here, with a co-star in Andrew McCarthy. This romantic comedy tells of Jonathan (McCarthy) who falls in love with a Mannequin in a department store who comes alive just for him, in the shapely form of Emmy played by 80s Crush for some, Kim Cattrall.

Here Spader definitely looks a villain, with his normally tousled hair slicked down and looking considerably more geeky than 1980s hunk (unless you like that sort of thing), and an evil glint behind his spectacles.

Spader’s evil part here is Richards, the Vice President of a department store who is more than disgruntled when Jonathan gets a job there. His perceived rival gets promoted to a vice president post after several successful displays featuring this mannequin. Richards decides to get rid of with the help of security chief, Maxwell (G.W. Bailey).

The pair break into the shop at night stealing the mannequin then selling her to a rival store. Leading to Jonathan’s jealous ex-girlfriend, who works trying to dispose of her “rival”. Spader was almost a comic pantomime villain here with an over the top comedic performance. And he gets punched by another character again.

But don’t confuse fiction with fact as the good news is that underneath the bad guy exterior, Spader is reported to be a nice guy. As Molly Ringwald said about her Pretty in Pink co-star, “I remember James Spader coming in and smoking a cigarette … and he was just obnoxious, but he was completely in character because he’s actually a lovely character. Very nice and not at all like the character he plays”  and added, “But he just had this real sneer about him … and I think he even dropped the cigarette on the floor and stamped it out, and just left.”

However, Hollywood casting directors should take note that despite playing villainous type roles in many of his movies.  Spader says he prefers to play the bad guy saying they are more fun.  And all his assembled evil roles to date must have helped him play the ultimate bad guy playing the voice of Ultron in a recent Avengers movie, ironically up against a one time victim to his villainy Robert Downey Jnr as Iron Man.

CLICK ON THE PIC… NEW… About Another Me: The Doppelganger in 21st Century Fiction, Television and Film by Heather Duerre Humann

My Current Memberships include…

CLICK ON THE PIC… Remembering The Love Boat’s Gavin MacLeod…

CLICK ON THE PIC for a book on Female Spies and Crimefighters. 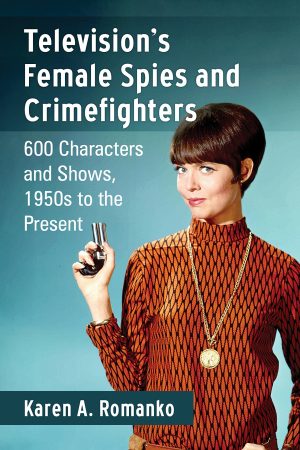