A concerned stepson asks Miss Marple to visit his elderly stepmother but it appears someone has murder on their mind. 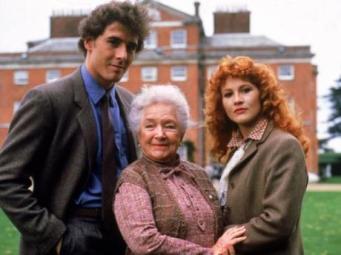 There is always something inherently overindulgent about the cast list of a film of an Agatha Christie novel. This film, Murder with Mirrors (1985) – even as a TV Movie – is of no exception. Since the 1970s, I’ve loved Christie’s film adaptations with a passion, be they those bound for the cinema or television.

This primarily due to their all-star Hollywood – and/or the UK – cast. Even shunning the then BBC and ITV offerings of those Miss Marple (1984-92) and Poirot (1989-2013) series in their favour. (Little realising until now about their amazing acting talent.) These Agatha Christie movie adaptations cast lists include such names as Elizabeth Taylor, Simon McCorkindale, Mia Farrow, Pierce Brosnan, Faye Dunaway and Oliver Reed.

These are even more delightful now as I recognise more of those names involved than I knew the first time around. The stars I knew then were usually from 1980’s TV soaps such as Lois Chiles, Emma Samms, Lee Horsley and Pamela Bellwood. Watching these films with my Darlin Husband is also fun, as my ever-observant partner in crime spots the smallest of cameos in an instant.

In this TV movie, the first time round I knew only a few members of this line-up. Then I was shocked at the inclusion of Golden Hollywood luminaries, Bette Davis and Sir John Mills. This in this line up of who’s that of British film and TV.

These lovelies along with the legendary Helen Hayes as Christie’s septuagenarian sleuth – Hayes however was 85 on making the movie – Miss Jane Marple. Now I was able to spot a few more familiar faces with the cast again from the telly and big screen including Tim Roth, Dorothy Tutin and John Woodvine.

Now read the plot and see if you can spot the murderer before I did… Miss Jane Marple (Helen Hayes) is in London visiting old friend Christian Gilbranson (John Woodvine). Gilbranson gives Marple – and viewers – a wee briefing of his family dynamics via photos of the cast.

But during their small talk, Gilbranson appears troubled, as the wee spritely and perceptive detective notices. He suggests a stroll, during which he tells how he’s terribly concerned about the welfare of his elderly stepmother. Marple says she will return home immediately and contact Carrie Louise.

Why he couldn’t let her use his office phone, I really don’t know. I assume she can’t use a London telephone box like normal 1980s people (ah the joys of mobiles!). He says he will join her at Stoneygates Hall later to explain more. (Why not now thought this viewer…)

Marple turns up at Stoneygates, where Edgar Lawson (Tim Roth) turns up to pick her up. Suddenly in a totally dramatic entrance, flaming redhead Gina – Carrie Louise’s grand-daughter (Liane Langland) – arrives in her jazzy car to pick up dear Aunt Jane.  As her pet name for this St Mary Mead’s supersleuth.

Gina tells us more of the back story, and it made clear Gina’s mother Pippa was adopted by Carrie Louise. But she died. In the 13 years that Marple hasn’t seen the family, Stoneygates has been turned into a rehabilitative institution for delinquents. These inmates including Edgar.

Gina tells us Edgar is a wee bit unwell, but a wannabe actor. Edgar has paranoid thoughts and preoccupation about his father’s identity even thinking it to be Paul McCartney. This is physically and morally impossible were this to be true with McCartney, as he’s only 14 years older than Roth.

Marple arrives at the old stately manor, Stoneygates in almost an instant. She meets her old friend, Carrie Louise who is out for a walk with her overattentive housekeeper, Miss Ballaver (Frances De La Tour) and Mildred. Ballaver and Mildred appear to resent each other, both jostling to care for the old lady.

The women witness Gina with her American husband Wally (John Laughlin) punching Steven in broad daylight. Wally tells him to keep away from his wife. Steven (James Coombes) is the institution’s American repertory director and he does Am-Dram with the inmates. This is held in the on-site theatre. Marple meets some of the inmates who unnerve her.

She is introduced to Carrie Louise’s doting husband, Lewis. He is talking into a microphone and looking more like he’s about to call Bingo numbers than narrate a letter. We meet his resident psychologist – the passionate about his job – Dr Max Hargrove (Anton Rodgers) and see an architectural model of that dream community rehabilitative institution both men wanted but gave up on.

Lewis tells Marple of his concerns that someone may be trying to poison Carrie Louise. He thinks that his wife is in a world of her own and out of touch with reality. He hasn’t told her about these worries. Gilbranson arrives and tells Lewis of his similar fears, and both are overheard in this conversation by Marple.

Later Gilbranson is cut off mid-speech when he talks to Marple about his concerns about his stepmother. The family meet for dinner, but Gilbranson leaves the others’ company saying has to type an important letter. After which Lewis and Edgar leave for his study to talk after an apparently paranoid Edgar threatens him. It is then revealed Edgar had a gun in his pocket.

There appears to be a power cut and raised voices are heard from Lewis and Edgar. Then an engine backfires outside unnerving all. Just after this two gunshots are heard from the study with concern for Lewis. Both men are found unharmed, with two bullet holes in a book. Ballaver reports Gilbranson has been shot in the head, and he’s found slumped behind a typewriter with no sign of the letter…

An inspector calls in the form of Inspector Curry (Leo McKern) and talks to Marple. Dismissing her dotty old lady persona as a charade. He gruffly asks for her support in finding the culprit and help in handling the investigation. The stage is set…

For in no particular order… red herrings,  jealousies, untimely deaths, character’s relevant backstories, the character’s irrelevant backstories, extra-marital affairs, unsupported alibis, dreams that only Marple can discover, monetary motives and dramatic possible attempts at murder…. and lots of stars chewing the scenery when the big reveal all scene arrives.

The film almost reminded me of Murder She Wrote (1984-96) with that twinkly, dramatic music for an opening theme. Supporting this was Gina’s pet name for her grandmother’s friend as Aunt Jane, like Murder She Wrote, where Jessica Fletcher is nearly always the suspect’s auntie. Or so it seems.

The film started with a rather pointless in-film advertisement for London. This including the Trooping of the Colour and familiar Laandon things be it the Houses of Parliament, red double-decker buses and black cabs. It surely would have been much cheaper to have in film graphics saying London, England but hey ho.

The cast as in all those British TV Movies seemed terribly polished English, so it was great to hear Tim Roth’s pleasant Laandon accent. Helen Hayes was a wonderfully sweet Miss Marple and I was surprised this her second Agatha Christie film outing as the elderly detective.

Hayes had a sweet on-screen rapport with all the cast members. Her on-screen relationship with McKern was sublime. This as he gruffly allowed her to participate in inquiries. He stood aside as Marple carried out her own unique ways of unmasking the culprit. But I was saddened to hear this Hayes final movie.

Her final TV appearance was in Glitter (1985) in the same year. In one memorable scene as Marple, on visiting the on-site theatre Hayes delivered a touching monologue quoting from many Shakespeare plays. And this a lovely now swan song tribute to this actress who I remembered from Airport (1970).

This was Davis’ second role in an Agatha Christie film with her starring in Death on the Nile (1978) five years previously. Murder with Mirrors, as a TV Movie was a total contrast to this previous lavish Oscar nominated, cinema bound production with Murder with Mirrors. This TV production had significantly less glamorous costumes and a lack of overseas locations.

Davis appeared quite gaunt in her scenes (due to previous illnesses) with her character’s back story almost supporting her frail look. The scenes with her and those other Golden Hollywood movie names were wonderful to watch especially those scenes with John Mills. Mills himself gave a charming performance, and the much younger others on the cast list were supportive and respectful to the older actors.

Davis’ initial scenes with her and Hayes were convincingly played as they reminisced on their much earlier connection, thankfully without a badly pre-doctored photograph. Finally, I read a charming interview with Helen Hayes, about this film from the Chicago Tribune.

Hayes fondly says this of her co-star Davis,

“She`s kind of a martinet, but I can take that from anyone who knows what they`re doing, and she sure does,“ Hayes said. “She is just a little major general up there on that set because she knows what`s right and what she wants, and what she wants is right.”.

Davis was said to be ever the professional completing scenes in one take and her on-screen rapport with Hayes saying Davis said this of their joint acting talents.

“We did the scene in one take, and the director said, “That`s great, print that. Gee, one take.”” And Bette said, “”If you want a thing well done, get a couple of old broads to do it.””

This film was added to In the Good Old Days of Classic Hollywood‘s 3rd Annual Bette Davis blogathon. Other films reviewed with this cast include Bette Davis in Death on the Nile, Madame Sin and Burnt Offerings. John Woodvine in An American Werewolf in London. Helen Hayes starred in The Love Boat and more. James Coombes starred in Doctor Who. Leo McKern starred in Damien: Omen II.  Dorothy Tutin starred in All Creatures Great and Small. Anton Rodgers starred in The Fourth Protocol.  John Mills starred in Tiger Bay and The Wrong Box.