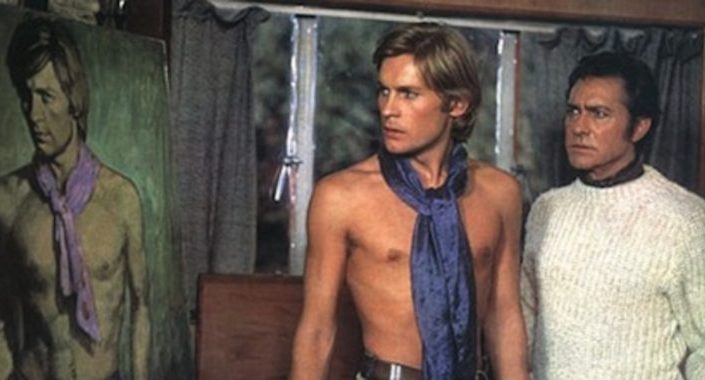 A handsome Helmut Berger stars as the man who traded this soul to never age, while his painting showed his corrupt lifestyle. 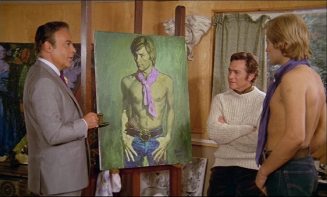 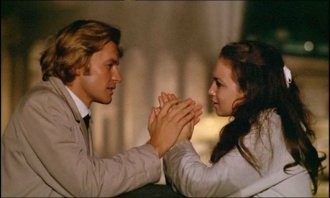 Dorian Gray / The Secret of Dorian Gray (1970) is the 1970 film take on a much filmed and televised Oscar Wilde tale. It stars an actor, I remembered from the original Dynasty (1981-89) as possibly one of Alexis’ toyboys.

This role it turned out, was with him instead bedding her daughter, Fallon,( Pamela Sue Martin). And with the clip, I found showing him with an accent that could melt butter. This accent means he could easily replace Liam Neeson as top of the list of actors I’d like to read me a bedtime story.

Anyway I digress, I should stress this is not a review on the film version of Dorian Gray (2009) with Colin Firth and Ben Barnes’ Dorian Gray. This  is the film account of events, in Dorian Gray (1970) otherwise known as The Secret of Dorian Gray.  And one with Helmut Berger, Richard Todd and Herbert Lom. The cast’s acting all sadly dubbed over in this English speaking version of the movie, apart from Lom.

Here this take on Dorian Gray tale is also updated to the swinging sixties and seventies with lots of sex scenes – both implied and otherwise – making this an NSFW review. So read on or switch to this perfectly harmless review of The Lego Movie (2014), if this, not your thing, or any other film or TV review apart from that similarly tagged NSFW Californication (200) one.  Now on with the story…

Just before the very cool and funky, bold coloured 70s opening credits, we hear two men arguing as a light swings erratically. it’s not clear why, with each of the men blaming the other on the condition of a painting one believing its impossible and the other named Dorian saying it’s possible.

This conversation only making sense as the story progresses. We then hear the music sounding at times dramatic then with a buzzing noise like a fly let loose in the recording studio. We then return to the earlier scene and see a man’s hands covered in blood. His breathing panicky and out of sorts, as the camera follows him as he walks down the stairs.

We see his reflection as a young handsome man, Dorian (Helmut Berger) in the mirror. Dorian looks haunted and shaken as he washes his hands. On his return upstairs, there’s a lifeless body, broken vase and more blood. On Dorian entering his living room, it’s clearly the 70s, with zebra print everywhere. And after he throws a jacket on the fire, through the flickering of his fireplace we return to the sixties.

Basil looks and dresses like Richard Burton circa pre-1970. Alan, like Simon Pegg went back in a time machine to make a Dorian Gray movie. Anyway, the bromantic trio leaves the pub, with the photogenic Dorian leaving in his rather jazzy car.

On return home,   Dorian drops into a theatre where Sybil (Marie Liljedahl) is practising her Juliet role for her upcoming Shakespeare production.  Liljedahl‘s as gorgeous as her leading man. The pair flirt and the annoyingly lovely looking couple end up going out for… a hotdog.

This after he turns down a baguette sandwich (?phallic symbols). We see the pair out and about in seventies London masquerading as sixties London  – to be fair its dark, so it could be seventies London – in their matching macs and trousers.

Cue 60s Britain inspired dating montage and very sweet it is too. They make love on the bed on her stage set (as seen and heard). By now I’ve got a bit of a crush on Helmut Berger. Making a mental note to check him out in the film he did with Michael Caine, The Romantic Englishwoman (1975) for my next Michael Caine blogathon.

Its revealed Dorian is being painted by Basil, posing shirtless in a scarf and trousers (sticking with the British definition of this lower garment to avoid confusion). Basil lives on his houseboat with his easel and paintbrush (along with his Richard Burton wardrobe). And Basil paints a lovely picture of Dorian, which is bloody good (and on par with the picture of Damien in Damien : Omen II (1978)).

The very rich Lord Henry Wotton (Lom) and Gwendolyn (Margaret Lee) arrive to buy a painting from Basil. The couple marvel at this picture and Dorian who is having a shower outside (also shirtless but with teeny-weeny shorts on). The shorts are even smaller than Patrick Duffy’s The Man From Atlantis‘ pair.

Wotton spouts random Oscar Wilde quotes (TBH Lom’s got that much gravitas he could be spouting from the phone book), as he smokes cigarettes from his cigarette holder, in a way only Lom can. Cue more scenes of Dorian and Sybil with the pair falling in love, as he takes her to his family ancestral cottage and its leafy, green grounds.

After Dorian making overtures of a sexual nature and then presents her with the grimiest of chaise longues, she bolts for it. Not surprisingly, she is playing a game of catch me with Dorian. As she runs for it, and as he catches up with her, he knows it. They make love artistically (and graphically) under a tree. As I assume young photogenic people do in seventies Italian movies.

But on meeting her family, Sybil’s big Viking looking brother, James (Stewart Black) is concerned.. and seems a bit too over-protective. Even Dorian notices. Dorian, then tells Basil of his love for Sybil. Basil’s finished the portrait. Wotton wants to buy it, but then Dorian insists he wants it.

Gazing at the picture which is bloody good, Dorian is transfixed by his image on the canvas. Dorian then offers his soul in return for looking eternally and externally as youthful and studling like as the picture evokes. The picture instead, taking on the brunt of his age and lifestyle.

Dorian keeps the picture, and shows it proudly to his aunt and Sybil, wearing a salmon pink velvet suit. A suit which only Helmut (and possibly the beige enthusiast from The Great Gatsby, DiCaprio) can pull off.

Dorian meets the Wotton’s rich friends at a 1960s party, in what looks like an Italian vineyard, complete with retro-looking food and grapes (the latter the only food I recognised). Whilst there an older woman Mrs Ruxton and young Gwendolyn make obvious passes at Dorian. Even Henry Wotton’s looking a bit lustfully at the blond-haired Adonis, and who can blame them.

After a while, Dorian takes the entourage to watch Sybil in her starring role at the theatre. Sybil gets jealous of the entire company’s attention and attraction to her man. On returning to the party with Sybil, the pair fall out, with her magically transported (through what seems to be really bad cutting) to a London street.

After they board a bus, Dorian slaps her, Sybil’s shaken. He reaches out for her, changes his mind. And he leaves. She wants him back, but as she gets off the bus is killed. Unknowing of this, Dorian returns to the party. He makes out artistically against a tree with Gwendolyn.

As the picture of the man on the canvas gets older. Seeing these changes in his portrait, Dorian asks Alan, a chemist to analyse the paint. Alan finds there is nothing wrong with it. After learning of Sybil’s death. Dorian undergoes a sixties and seventies lifestyle change with life of lust, debauchery. blackmail and murder… with anyone and everyone.

Dorian realises he’ll always look this young as everyone and his picture ages…and this explaining the crucial opening dialogue as it appears Basil is shocked that the picture has taken on Dorian’s hedonistic lifestyle. Dorian remembers that he has traded his soul, for his eternal youth and his life revealed in the ageing of the picture…

I really enjoyed this film version of events but found it unclear as to the exact timescale of the story as sadly no visual pointers are given. So should you want to measure time passing its best to look at his male co-stars as Lom, Romano and Todd all become silver foxes (some more silver fox than others) as the story goes on.

The setting and ambience of the story in Swinging London were captured well. Notable here was the London inspired date for Dorian and Sybil, with red phone boxes, statues and water from fountains all playing a part.

I loved the sixties and seventies fashions and lifestyle,  with girls wearing shift dresses to more garish 70s frocks. Berger was dazzling in (and out) of those velvet suits, those sparkly seventies jackets and the unforgettable zebra print trenchcoat towards the end. I loved the frocks, Mr Berger’s wardrobe, the disco scenes with dancing-girls and backdrop to the montages all adding to the feel to this updated story.

I adored spotting two familiar faces in this film. Herbert Lom and Richard Todd. Both appearing in the Amicus anthology movie, Asylum (1972).  it seemed these three men, Lom, Todd and Berger had a great rapport on-screen in their scenes together.

However, it was sad that only Lom was able to retain his distinctive voice in this English dubbed version of the film. And this with the others’ more bland dubbing led to Lom easily showing himself as having the gravitas, presence and voice needed for his role.

I loved Berger in this title role, and he was the perfect man for this role with his otter build (see Ryan Reynolds pre-Deadpool (2016)) and chiselled but boyish features. He played the role admirably and was well suited to this character in this more modern adaptation of the tale.

With his sense of style and panache, he seemed the epitome of style in both sixties and seventies wear. I found out after writing this post, there are an Italian original and English subtitled version of this film. Which on watching this dubbed film, I had been sadly unaware of. Having just seen and comparing these versions, it’s more than obvious that this was the version to watch and to review. I’d advise you to check this version out, if you want a more timeless version of this picture of Dorian Gray… 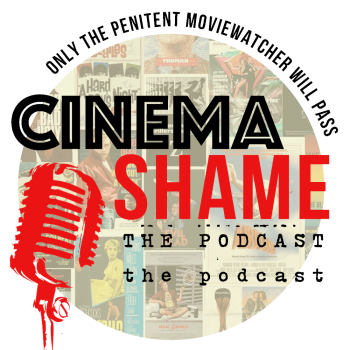 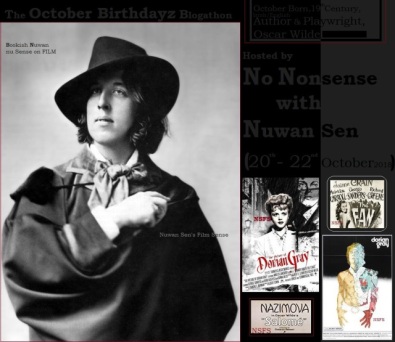 This is the first of three posts added to No Nonsense with Nuwan Sen’s October Birthdayz Blogathon and Hollywood Genes’ Always A Bridesmaid Film Blogathon.As for this post; I’m adding posts on Deadpool (2015), Roger Moore and Dorian Gray (1970).. with Oscar Wilde born on October the 16th.  Other reviews with this cast are seen above.