My favourite hit man’s back and he’s in a lot of trouble, oh yes John Wicks back…

The long awaited third (and final?) part of the trilogy finds the titular anti-hero a wanted man. 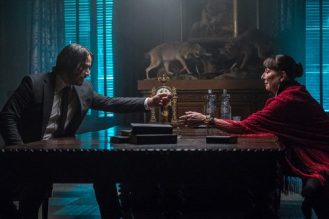 As you know this is one of those few testosterone-fueled movie franchises that I adore. So it was with much sadness, I watched this the alleged third and final outing of Keanu Reeves as John Wick. This is the snazzily titled John Wick Chapter 3: Parabellum (2019).

If it is the last of this series, I can honestly say I don’t mind if they change their mind and add a Chapter 4, 5 and 6 to this series. Just as long as they don’t cast Ryan Gosling or Danny DeVito in a “John Wick has plastic surgery storyline” if Reeves refuses to return.

So if you are completely new to the charm of this debonairly dressed hitman click HERE for reviews for Chapter 1 and HERE for Chapter 2. Otherwise not to worry, as Chapter 3 so well written its a standalone film, as in film explanations are given as needed rather than all the bloody time. This combined with plotlines told you as you need to know to make this one of the most enigmatic of franchises.

This film also starring Reeves’ constant co-star Ian McShane. McShane I’ve recently seen in Season 2 of American Gods (2017) in a character who now I love to hate. This film also stars Halle Berry – my thoughts were meh on seeing her in the trailer – and Angelica Huston.

Huston played a character I hated in Prizzi’s Honor (1985) but one I adored in those Addams Family (1991) films. Not forgetting Wick’s dog, Laurence Fishburne, Mark Dacascos, Asia Kate Dillon and Jerome Flynn.

The film obviously learning from the James Bond franchise calling their latest offering, John Wick, Chapter 3: Parabellum. It’s good they added the John Wick bit in the title otherwise this could have been a forgettable title.

That is unless you are so obsessed with Keanu Reeves you have all his movies – including his upcoming ones – tattooed on your arm. Or you are Mrs Keanu Reeves ie Winona Ryder and you constantly hear his moans of “why did they call it…?”  as he (confused like us) shakes his fist to the sky in anger.

So a storm is brewing in NYC, then it rains much more than a Zack Snyder movie. With just one hour left until Wick is a wanted man with a bounty put on his head. This all for killing a crime lord, member of the high table in The Continental. Wick is running and running.

Wick’s running more than Forrest Gump (1994), but less than Tom Cruise in all his movies. Wick heading for the library – with his trusty dog in tow – with an hour to kill (which he does figuratively and literally) until he’s officially on that hitman hit list, and he’s “ex-communicado”.

As the countdown begins. Immediately I’m glad I didn’t see this film at home as Darlin’ Husband started imitating the Countdown (1982-) TV Show clock when we discussed this bit of the film.

Wick makes it to the library – and sends the dog off to the Continental by taxi – he collects some blood markers and a cross on a chain – stashed in a Russian Folk Stories book ( “a reference to Baba Yaga – John Wick’s nickname – a popular Russian/Ukrainian fairy tale” – informs my Darlin Husband) and looks wistfully at the photo of his wife also in this book. Then he kisses the photo. Wick then fights a supertall dude and kills him (eventually) using the book.

Then the critically wounded Wick legs it, and runs on. Then he runs on some more to the doctor’s to get patched up. As the doctor sews him together, the clock strikes 6. Wick’s now not able to use the services of The Continental so he finishes the sewing job off himself First Blood (1982) style. After Wick scoffs some painkillers he’s off again, now with a hefty 14 million dollars bounty on his head…

Using everything available to kill his adversaries en route – from horses to guns – he heads to a theatre. Dispatching a few more hitmen on the way and the bounty on his head increasing. Meanwhile, Winston (McShane) and the Bowery King (Laurence Fishburne) are getting a bollocking for letting Wick live.

This from a mysterious woman from the high table who is getting on her high horse about it. This woman is known as The Adjudicator. She and her hitman wingman Zero (Mark Dacascos) are both more than a bit on the intense and scary side. Winston given seven days notice to resign, as John Wick faces The Director (Huston) and we find out Wick’s origin story.

That’s all I’m telling you about the plot, as I don’t want to spoil this completely for you.  Wick’s fight scenes are wonderfully and credibly shown, and Reeves rising to the occasion as always. But let’s just say John Wick’s at his most resourceful (so far) when it comes to weapons. He has more weapons than Michael Caine in Deathtrap (1982) at his disposal.

Without giving away spoilers, this film also takes us to exotic locations with some incredible cinematography. These scenes, of course, our hitman continues to be the worlds best-dressed hitman in with him not even changing his suit to more appropriate attire. His trademark suit always the same in all his scenes adding to the first shooter feel to these films, rather than a jarring moment.

It was lovely to see McShane and Fishburne once more. McShane providing the gravitas and presence as Winston. His loyalty and support to Wick, one of the movies most intriguing bromances. I’m sure there is some back story between this pair we’ve yet to discover.

My money is on Winston being John Wick’s dead wife’s father. Or maybe this storyline will have an American Gods twist. Time may tell. Fishburne, a new addition last time round was as charismatic as ever and I’m hoping to learn more on his character should there be a follow up to this film.

Halle Berry, who I spotted in the trailers was a surprisingly good addition to the male-led storyline. Where I’d been ambivalent about this actress joining this movie, I was happy to see that she wasn’t the love interest I feared she’d be. Jerome Flynn was a WTF moment as for me (and possibly some of you).

I last saw Flynn as he gracing no 1 (for seven weeks, pop pickers) of the British music charts with Robson Green in the 1990s. Green was Flynn’s chirpy co-star in Sunday’s nights ITV offering, Soldier Soldier (1991-97). Their joint musical career, was a duet was orchestrated by the music maestro himself, Simon Cowell.

But it seems, it is probably just me that was freaked by Flynn’s appearance. Darlin Husband told me that many of you readers probably saw Flynn in Game of Thrones (2011-19). This I confess is a series which I’ve never seen. But in John Wick, Chapter 3, Flynn proves he’s not the only one with some Number 1 hits.

This post was added Maddy Loves her Classic Movies’ Noirathon. Other posts with this cast include Keanu Reeves also stars in John Wick Chapter 2, John Wick Chapter 1, Rough Guide to Movie Dogs, Bram Stoker’s Dracula, Point Break and The Lake House reviews also feature here.  Ian McShane also stars in Dallas and this tribute to him in 5 of his appearances HERE.