For Harold, his first love and Maude, her last love…

Harold, a twenty-year-old man obsessed with death meets the free spirit seventy-nine-year-old Maude at a funeral. 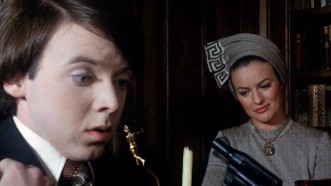 Some movies, can make you happy but lead to a poignant and bittersweet ending. These films include the always wonderful One Flew over the Cuckoo’s Nest (1975). Others include this film, Harold and Maude (1971), a film which celebrates it’s 50th anniversary this year. The film’s plot tells of a relationship between an older woman and a younger man, with a lesson telling us to embrace life rather than dwell on death.

The leading lady is Ruth Gordon, an actress who in her much later career thrilled us in Columbo (1971-2003), made us laugh in Rhoda (1974-78) and scared us in Rosemary’s Baby (1969). The lead actor, Bud Cort is best known as the voice of that rather creepy computer in Electric Dreams (1984). Also in the cast, albeit in a wee cameo is Tom Skerritt.

These two actors appeared in the MASH (1972) movie together. Skerritt recommending Cort for the Harold role. And if you are on the lookout for Skerritt, he’s the motorcycle cop. Or if you spotted him before, just telling you this to confirm this, if like me you nudged your partner as you recognised him, at this moment in the movie.

The film tells of 20-year-old Harold Chasen (Cort), a young man who still lives with his mother (Vivian Pickles). The pair live in a massive mansion, which seems as cold as austere as this overbearing, detached and self-obsessed woman. Mrs Chasen seems in a permanent state of annoyance with Harold. There’s no sign of Harold’s father, so in instances where paternal guidance is required, she’ll refer him to Uncle Victor (Charles Tyner) she’s that cold. Victor is a one-time war General who lost his arm in the war.

Harold stages elaborate fake suicidal attempts in his mother’s presence to win her attention, however, she seems to choose to ignore these pleas. Harold attends psychotherapy to explore his more morbid feelings but chooses not to. Harold also wears dark clothes, drives a hearse and attends funerals for people he doesn’t know. It is during these funerals he first sees then meets Maude (Gordon).

Maude like him doesn’t know the deceased. Maude in contrast to Harold embraces life, wears more colourful clothes (even at funerals) and she has a much more positive outlook on life. She lives alone in an unused railway carriage, crammed full of memories, photos and random stuff. She believes life is worth living, is an erratic driver, an artist and an artist’s (nude) model and often steals cars or even police motorbikes (cue Skerritt). Maude teaches Harold about her lust for life and how to play the banjo.

Their friendship which leads to romance begins after he spots her at a funeral. When they see each other at a second funeral and she offers him a stick of liquorice. She then steals his car and offers him a lift not knowing he’s the car owner. Harold confronts her about taking his car but then gives her a lift home. The two then develop a friendship and then in time they fall in love as a romantic relationship blossoms.

This despite Mrs Chasen’s attempts to fix Harold up with three women on the internet. This after she fills in the questionnaire. and answers the questions as if it is her looking for a date. An act which shows her more narcissistic and not aware of her son at any level of understanding. The girls meet Mrs Chasen and then meet Harold, who intentionally ruins his first impressions.

Harold carries out more staged self-harm and parasuicidal attempts in his dates presence. After two women are put off by these behaviours, one girl (Ellen Geer), joins him in a fake suicide staging. Then Harold’s mother believes that Harold should join the army, sending him to meet with his Uncle Victor. However, Harold has fallen for Maude and plans to marry her…

Despite this dramatic description, this film is billed as a black comedy. Added to this is also, of course, those then-controversial scenes suggested that the pair found romance. The film is beautifully executed with many darkly comic scenes. On one occasion, Cort looked to the fourth wall to comic effect. This young actor secured the role after confidently stating that he was Harold at his audition, and this was immediately agreed on by those interviewing him.

As a method actor, Cort’s performance often shocked his co-stars and the film crew. Also, Cort’s improvisation reportedly upset Gordon who stuck to the script. Cort’s method acting techniques almost mirrored the lengths Harold goes to, to stage the perfect fake suicide. The actor himself has talked about how meticulously he staged the opening scene where Harold appears to get ready to hang himself.

“Cort lay face down in the heavily chlorinated water of the Rosecourt swimming pool for take after take until he could no longer keep his eyes open.”

In contrast, as Maude, Gordon gives a strong, enthusiastic and engaging performance as Maude. You share her character’s sunny outlook and enthusiasm for life in her scenes. My favourite scene is where Maude rescues a sad-looking tree planted in a pot in their town. Maude then steals a shovel, a car and then lovingly lets it live happily ever after planting it in the forest with the help of Harold. This appears to be in contrast to Maude’s earlier life as she talks of being a once-married woman, Dame Marjorie “Maude” Chardin and her life in pre-war Vienna.

The plot hints through a telling tattoo that Maude was later was interred in a Nazi concentration camp. But it’s apparent that she now lives a happier carefree existence. This older woman provides the support and love that Harold needs. He feels supported as he tearfully opens up to her about the reasons behind his fake suicides. Her cheerful disposition also transforms Harold’s bleak outlook. He is seen wearing lighter coloured clothes, learning to play the banjo and having fewer thoughts on death and more optimism.

Vivian Pickles plays her character convincingly. You can feel her annoyance at her son’s antics and she seems less evil but her unaware of his need for love and attention. The scene where she buys him a sports car as a present shows her lack of understanding of him. As does her response, when he later converts it into a hearse. In another scene where Harold appears to have drowned, she swims past him without a word.

Her role – if this film were to be remade (although I hope it isn’t) could now be filled by Stephanie Beacham. Speaking of remakes this film has often been seen on stage, everywhere and anywhere. As Harold, a more boyish looking actor with a flair for dark comedy…  but I’m going back in time to cast a young Rob Lowe or Andrew McCarthy (see Class (1983)).

Although a wonderful British actress Sheila Hancock once was cast as Maude, I feel this actress was way to statuesque to fill Ruth Gordon’s boots. Although only five foot tall as Maude, Gordon is a treasure and her height brings a unique presence to this role. Therefore the 5ft 1 Judi Dench might be – emphasis on the might be – a better substitute.

Despite this film’s failure at the box office which was put down to poor marketing for a then Christmas audience, this is now a cult film. It has a twice released soundtrack from Cat Stevens including the song If You Want to Sing Out, Sing Out (as featured HERE) in the movie. This song is sung by Gordon as Maude sings this inspiring song to Harold during the movie.

The lead characters controversial age difference romance was sadly edited heavily. It’s reported that actress Ali McGraw – although liking the film – felt that her then-husband Paramount Head, Robert Evans should cut out Harold and Maude’s first passionate kiss from the movie. It is hinted however that the two characters slept together. However, Ashby later added the kissing scene to the film trailer, believing correctly that this the essence of the story.

Harold and Maude’s age difference was even commented on by critic Roger Ebert who added HERE.

The word has gotten out that “Harold and Maude” is the story of a love affair between these two people. It is not, so necrophiliacs please stay cool.

However personally, as an older woman to a slightly younger man, I know of others in film and TV (The Graduate (1967) film and some TV examples are reviewed HERE) who also have loved or married much younger “cubs”. I also know of many much younger women who’ve married or been with much older men (in films such as Blame it on Rio (1984) and Californication (2007-14)). There’s always going to be someone younger in the relationship, so as long as it’s legal I believe that if you love and feel loved in return, that’s all that matters. As what’s age got to do with it?

This post was added to The Pure Entertainment Preservation Society‘s Unhappy Valentine’s Blogathon Other reviews with this cast include Ruth Gordon in Rhoda, Columbo and The Love Boat.  Bud Cort also starred in Columbo. Both feature in the Harold and Maude soundtrack and meet cute reviews. Vivian Pickles starred in The Avengers. Cyril Cusack starred in Juggernaut.  Ellen Geer starred in Dynasty, Moonlighting, Dallas, Fantasy Island, Charlie’s Angels and The Bionic Woman. Tom Skerritt starred in Top Gun and Ted.