The true biopic of the life, loves and criminal career of the Kray Twins both played by Tom Hardy. 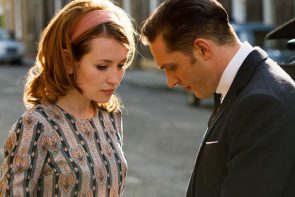 Before I tell more about this film I want to stress that this review is on the biopic of the Kray twins and not on the Tom Cruise and Mia Sara fantasy flick also named Legend (1985.) So if you are looking for a review with a long-haired Cruise,  then I suggest you read my Rock of Ages (2012) one. Mia Sara?  Tune in for a Ferris Bueller’s Day Off (1986) review, any day soon. This Legend (2015) film is about the Kray twins who were high profile gangsters from East London. This is the second film I’ve seen on these infamous brothers.

The first film, The Krays (1990) starred the Kemp brothers – Martin and Gary – and both guitarists – and in Gary’s case backing singer – from the 1980s New Romantic pop group, Spandau Ballet. Which was kind of distracting when watching the film – as I was a teen fan of the group – especially with Martin’s foppy 1980s haircut.

Martin went on to appear in EastEnders (1985-) as Steve Owen, one of this British soap opera more memorable villains, but with a better haircut. Gary ended up in The Bodyguard (1992) with Whitney Houston and Kevin Costner. As far as I remember Gary didn’t sing. Kevin Costner didn’t sing either. Unless of course these scenes ended up on the cutting room floor, like his appearance for all of The Big Chill (1983) apart from those opening credits.

Legend has Tom Hardy playing both of the Kray Brothers, the infamous gangsters from the 1950s and 1960s London. It tells the love story of Reggie with first wife Frances. Along with more on the notorious twin brothers, their relationships and their crime career. The film starts in the 1960s, a year wasn’t given but with a British history buff beside me it was narrowed down to the second half this decade.

It stars Tom Hardy, who seems to like playing shady and sinister characters having played Charles Bronson and Batman’s nemesis Bane.  This led to Darlin’ Husband’s impersonations of Bane – to be fair he does do a good one – and fun apt quips but then he got into the movie.

The film is narrated throughout by Emily Downing as Frances Kray, Reggie’s girl and future wife. As the film progresses, we learn more of their at times troubled relationship and more the lives of him and his brother, Ronnie. The film firstly introduces us first to Hardy as Reggie. Reggie portrayed initially as a cheeky and loveable EastEnd geezer.

He regularly is seen swapping retorts with the local constabulary. These namely Leonard “Nipper” Read (Christopher Eccleston) and his cohort, who are observing him. He appears very charming and charismatic. He visits one of his gang, and meets one member’s little sister Frances.

There is an instant attraction and then flirtation between these two. Her mother (Tara Fitzgerald) doesn’t approve as they start to date. In these initial scenes you almost forget it’s a movie on the Krays. More a tale of star crossed lovers in a cross between a British rom com and an episode of Eastenders.

We are then introduced to Ronnie, who is in a mental health hospital. Ronnie has a diagnosis of paranoid schizophrenia. Before you worry about recognising which twin Hardy is in a scene.  Hardy helps us here using markedly different voices and a pair of spectacles for Ronnie.

Also it is evident from their personalities portrayed here with Reggie as the charming, friendly, more humorous one. Ron appears less sociable and very suspicious of others. It is unclear from the movie, if this the effects of his not taking his medication. He may have the effects of long-term schizophrenia. Or his presentation due to his personality, or with both contributing.

Hardy plays Ronnie as the more frightening of the two as a cold man with a quick temper. Ronnie also reads too much into others facial expressions and actions. Reggie threatens Ronnie’s psychiatrist. As Ronnie is discharged from the hospital, although he is reminded that he must continue to take his medication. His psychiatrist states this medication helps to control Ronnie’s illness and more aggressive outbursts.

The brothers criminal career is shown in the initial scenes when they take part control of a nightclub. But through less friendly means. As Reggie and Frances continue dating, she is taken to his nightclub, it is seen as an almost glamorous lifestyle. In almost child like awe, it impresses her. Reggie name drops some of the more famous clientele attending his club to his love sick date. She also meets fellow gang members and Ronnie’s boyfriend, Teddy (Taron Egerton).

We are then introduced to their turf war rivals, The Richardson Gang who in comparison seem more frightening. As Reggie is taken back to prison,  Frances continues to be loyal to him. Ron however left to look after the club, has an angry outburst which results many of the regulars leaving.

On hearing this after he is released from prison, this leads to an aggressive fight between the brothers. This physical fight between the twins shocks Frances. Reggie then proposes to Frances. This in a soppy romantic way climbing up a pipe with a bunch of flowers.  It is almost reminiscent of that Pretty Woman (1990) scene.

So to find out more of this true story you know what to do!!!! The film has an excellent soundtrack using many 1960s songs to reflect the screen happenings. At times, this was charming and others irritating. The latter as it almost felt as contrived as Mamma Mia (2008).

Hardy makes each twin unique from his research speaking with those who knew the Krays. He then approaching the men’s individual mannerisms in the movie. He has such an excellent East End accent you could close you eyes and wonder why Jason Statham isn’t whispering. His scenes with both characters were excellently cut. The film flawlessly cut you can almost believe there are Tom Hardy and his twin playing the brothers.

Emily Browning was strong in her role as Frances. At first, she seemed very young and naive girl. Then later as Reggie’s partner, she hoped she could reform him. This once she learnt more about his criminal ways. The story also touches on Ronnie’s alleged involvement with Lord Boothby and the subsequent interventions by Harold Wilson.

I almost expected this carried out by Mike Yarwood. Yarwood often did a 1970s British impersonation of this Prime Minister on the telly. Ecclestone and Fitzgerald get little screen time. There is just two small scenes with Violet the boys’ mother. However Hardy’s dual roles will make such a strong impression on you. He really is an acting legend in his own lifetime.

This review was submitted to the Dual Roles Blogathon. This was run by Christina Wehner and Silver Screenings HERE. Reviews done with this cast include Hardy in Tinker, Tailor, Soldier, Spy. Emily Downing stars in American Gods. Christopher Eccleston in The Others. Taron Egerton stars in Eddie The Eagle. Other biopics reviewed include Brian Wilson of the Beach Boys in Love and Mercy (2014), Sweeney Todd in an Alan Rickman post. More film biopics be found under Biopic and Starry Biopics.