A younger, useless, Prince is sent by his father to help his adored elder brother on a quest; to save his brother’s lovely bride to be from the clutches of an evil wizard. 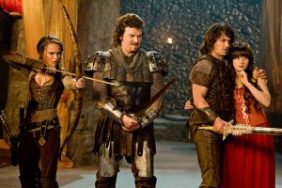 At the moment, Sausage Party (2016), a raunchy stoner adult comedy – with the talents of Seth Rogen, Danny McBride, James Franco and their oft-screen companions – is enjoying it’s run in the cinema for those who enjoy a good old R-rated adult comedy. But here in Finland, where we have the luxury of watching the adult cartoon, Family Guy (1999) omnibus on Saturday afternoon if we choose to, this film was rated a 12.

This means in theory a 9-year-old kid in Finland – as up to 3 years younger than this rating can watch this film over here when accompanied by an adult – can go to this movie. An unsuspecting parent may think – if they haven’t heard of the movie – it’s a harmless Pixel movie.

Your Highness stars Danny McBride – who also co-wrote this film – as Thadeous, assumed useless younger brother of the more dashing, daring, well-loved Fabious (James Franco). Appearing like an ancient fairy tale, in the pre-credits first scene an old book is opened and the narrator leads us to a scene with a girl being saved from a wicked magician by a handsome man on a stallion. She prophesies how 100 years from then when the 2 moons meet again, a new daring hero will be revealed.

As the film starts we fast forward 100 years to the Middle Ages,  where Thadeous is about to be hung for sleeping with a little person King’s wife, a tall leggy busty blonde. At the moment of reckoning, however, he finds as he crashes through the platform, he’s not that far off the ground. Thadeous makes his escape with his trusty servant Courtney, leading to ye original Olde film font for the credits along with an animated cartoon bawdily graffitied.

On their return to their home in the Kingdom of Mourne, Thadeous’ father King Tallious (Charles Dance) reprimands him for showing up their country and Fabious returns. Not only has Fabious killed a Cyclops but he’s found a lovely fiancée in the shape of the innocent, Belladonna (Zooey Deschanel).

On their wedding day, the loved up Fabious and Belladonna sing their vows to each other with Franco’s vocal talents making Pierce Brosnan’s Mamma Mia (2008) singing look much more tuneful. Thadeous – despite being Fabious’s best man – skips the wedding after he overhears Fabious’s Knights Elite ridiculing him – and gets stoned with the local shepherd instead.

Meanwhile, at the wedding, the evil sorcerer Leezaar (Justin Theroux) appears with his three evil mothers and whisks Belladonna away to his tower. There Leezaar hopes to fulfil a prophecy where he will take over the Kingdom by impregnating the virgin Belladonna when the two moons become one. Fabious vows to rescue his bride to be and save his country with his B Knights Elite including Boremont ( Damian Lewis), his trusty servant Julie (Toby Jones) and his mechanical bird, Simon.

On Thadeous’s return, he is commanded to help his brother by his father or be banished from the Kingdom. The brothers and their entourage set off on their quest with a few adventures… and meet a warrior princess Isabel (Natalie Portman) along the way.

I totally recommend watching the rest of the brothers’ adventure but not with your 9-year-old as there is swearing, double entendre and lewd gestures galore. I was surprised to see this film was deemed a flop as both my Darlin’ Husband and I enjoyed it despite this.

I felt it was an original film and often parodied the fantasy-adventure movies of my childhood such as Clash of the Titans (1981). The sets, costumes, props and improvised script were in tune with the time period. McBride signed up craftsmen from such films as Braveheart (1995) and Kingdom of Heaven (2005)to create props and costumes.

Danny McBride was a refreshing change from the chivalrous knight and warrior throughout the movie as his character instead developed from antihero to hero. I would love to have seen him portray a similar character in Knight Rider as KITT, Knight beloved A.I. car. When McBride swears saying “Fuck That” for example, it feels more amusing than offensive, and this particular line could be used to comic effect as KITT. But only if he and rumoured co-star Chris Pratt parodied this show.

McBride and Franco both hammed it up as the script went on and their acting almost tongue in cheek at the expense of those warrior movies from the 1980s. So I was surprised that Franco received a Razzie nomination for this film. Justin Theroux makes a great camp villain and approached his character in a fun deadpan way.

Zooey Deschanel’s part as the bride to be and damsel in distress and Natalie Portman’s later appearance as a warrior with a quest and a heart, almost mirrored the male lead performances. Despite all the criticisms for this movie, Wikipedia reports Portman was praised for her performance by Entertainment Weekly as “fierce and funny as a babe warrior…good with dirty words” and reportedly loved her comic part.

Deschanel also managed to get to sing a wee duet with Franco, which was much, much less irritating than the songs in her New Girl series, which irritate me. She even managed to sneak a song into her brief appearance in Rock the Kasbah (2015). But is in no way taking over a film with it, as Kristen Dunst does in the Tobey Maguire’s Spiderman (2002-2007) trilogy.

Your Highness seemed very much a  totty filled bromance for boys. But I found it more amusing than your above-average rom-com. As I’m sure both ladies were cast for totty effect, for the boys as were later characters they encounter. But girls – not to worry – there’s still James Franco and Damian Lewis for us totty wise. But don’t tell your strict polite Charles Dance adoring mother-in-law he is in it – as it’s would be like showing her that John Hannah appearance in Spartacus (2010-11). As Danny McBride would probably say in his unique, sardonic manner “Fuck that, just show her Starter for 10 “.