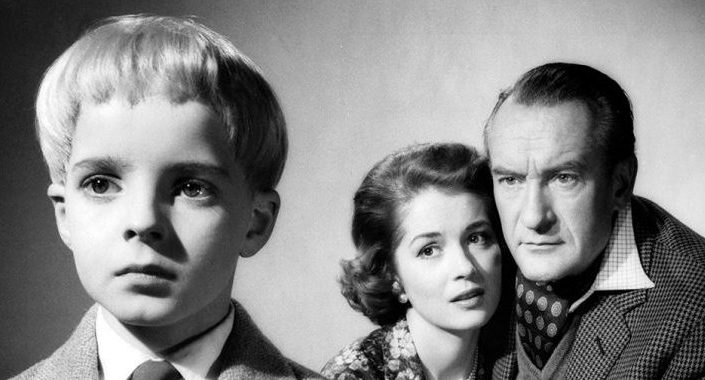 The Kids Who Stare at Folks…

Simultaneously. all the villagers and animals of an English village fall unconscious for a few hours. Shortly after this time, all the women find out they are pregnant.

Village of the Damned (1960) has been on my to watch pile for way too long. So it made itäs way to the top of that never ending pile after seeing this film’s The Simpsons parody. So, it’s with great pleasure to share my thoughts on this sixties horror this coming Halloween.

Admittedly, before this, I had been keen to review the 1995 remake of the same name, and this was long before I discovered the original film. Tell me, who wouldn’t want to review the remake, with John Carpenter directing the likes of Christopher Reeve, Kirstie Alley and Mark Hamill?

Until like me, they’d watched both trailers and then firmly decided that this the original version is without a doubt the only one to watch. The kids in the later colour version all looked like extras from that Bonnie Tyler video and / or raided a wig shop.

In contrast, the original film is in black and white, the kids’ hair looks more convincingly eerie and it has a really wee and still very spooky Martin Stephens from The Innocents (1961). Stephens played David Zellaby, the eloquent head honcho of those little white-haired scary kids with hypnotic eyes.

This 1960 film is chilling even before the credits roll. In Midwich, somewhere in England, Gordon Zellaby (George Sanders) collapses mid telephone call to his brother in law, Major Alan Bernard (Michael Gwynn). He falls to the floor, and Alan’s secretary tries to call him back via the operator, but there’s no reply.

Then like a row of upright dominoes falling together, we see everyone in Midwich fall unconscious. These sinister blackouts also happen in animals. In these chilling scenes, there’s no added accompanying music but sights of a tap that was left on and an iron burning a dress.

Alan asks his army superior if he can leave work early and check on things up north and his boss agrees. En route, he stops a policeman on a bike, and they talk about the situation. The cop then falls off his bike when he goes to investigate the local bus in a ditch, this just a short cycle away. Alan joins up with the army who luckily are training nearby they do some tests using a canary in a cage. The canary collapses too, only to revive once out of this spooky zone.

So the army tries this out with a man in a gas mask and the same thing happens, and the man saying he felt a wee bit cold as he comes round. Then some poor sod in a plane reports about the aerial view, and Alan asks him to go lower to check on the village. This leads to the pilot blacking out and then the plane takes a nosedive. On hitting the ground it explodes. (Whoops!). So a warning is given out not to fly low over Midwich… as the army cordon off the town.

About four hours later, everyone’s right as rain again and carry on as normal (and these events now reminiscent of that Moldavian wedding massacre in Dynasty as described HERE) and all the animals are ok too. (But not that poor sod in the plane.)

George Zellaby and his young wife, Anthea (Barbara Shelley) both think they had a little sleep (how sweet), in different rooms. The local doctor (Laurence Naismith) thinks everyone is ok, they’ve just complained about a few wee cuts and bruises. (We never find out about what happened to the poor sod in the plane, so we will never know if he dragged himself out of the fiery wreckage…)

Shortly after this incident, the women of the village all find out they are pregnant (which would have been a fun twist in the aftermath of that previously mentioned Dynasty series cliffhanger). Anthea is super excited and tells George about her pregnancy in the best botanic themed baby announcement ever.  However, there are a few surprises for some other women who haven’t been near a man (god forbid) or their man hasn’t been near them for a year… cue a few unhappy/livid husbands… and unbelieved wives.

The good doctor then does some maths and discovers all the women are due on the same day and got pregnant during the blackout, and more chillingly… they have seven-month-old foetuses at five months. This news freaks Anthea out a bit.

The women all then give birth to 10lb plus babies with white hair (it was reported to be platinum blonde in colour), dark eyes and telepathic powers. The kids also have the ability to control adults to do what they want.. however, it’s noted the Zellabys’ dog is wee a bit suspicious of their new baby.

After the kids are born, they are seen to be advanced in size, maturity and are super quick learners. They are fantastic at problem-solving and this seen as Zellaby proves this as some of the kids open a trick box to find chocolate. After a big brother steals this box to try the test out, his little sister gives him the evil eye (cue spooky special effects) and he automatically turns around and he gives it to her.

The village and other kids are a bit suspicious of these kids. These kids hang out together in a group, with their little matching suits and badly fringed hairdos. George and Anthea’s son David (Martin Stephens) is very precocious for his age. He’s also eloquent, but cold, emotionless and unable to show empathy. George talks to some British Intelligence officials and he discovers there were other wee communities of these kids worldwide…

This film was based on the John Wyndham novel, The Midwich Cuckoos. It was surprising to learn this was originally going to be an American film, however, (luckily) the plot moved to an English village. The plot seems more appropriate for an English village, and the villagers’ suspicions of events reminded me of scenes in The American Werewolf in London (1981). (This is in the scene when the two American students visit the Yorkshire pub). The Village of the Damned was filmed in Letchmore Heath, which is a village a little north of London.

The film was filmed in Black and White which enhanced the storyline and added to the chilling ambience. It’s one of these films that wouldn’t transfer well to colour as it would lose its charm and its effectiveness as a chiller. I loved the simplicity of the story. Events flowed naturally in a convincing way and this made the film more captivating.

There were a few special effects within this film. Notably, when the spooky children’s eyes glowed. The remainder of the children’s supernatural traits was seen in their strong acting performances. These children also had padded wigs to make their heads look bigger, yet these wigs seemed more realistic than in the remake.

The adults and other children in the storyline acted in reaction to events after the blackout in a natural and appropriate way. These behaviours made the plot seem a credible premise, rather than one of fantasy. However, it did puzzle me, as to why the animals also collapsed at the beginning of the film as this reason was not explored. It did look a bit spooky. The story was an interesting one, and I felt it left no room for a sequel (or a remake).

Stephens showed his young character perfectly, with this the perfect audition piece for his character Miles in The Innocents. (Stephens’ character Miles was another super spooky, eloquent and mature boy). All the other spooky children in David’s peer group added to these children’s fear factor. However, Stephens had the largest speaking role.

My fear of these kids increased particularly when one such child was nearly run over, and the other kids in the group get their revenge. This by forcing the driver to kill himself by controlling his mind to drive into a wall. As the townsfolk go to confront the children about their behaviours, it reminded me of similar film confrontations in the horror genre.

Sanders played his character well. This seen as his character gave manly support and understanding to his wife during her pregnancy and in his interactions with their son. His character also hoped to learn more about his son’s abilities, strengths and weakness and he takes an active interest in these spooky children.

This led to some interesting revelations as he gets an honest response from his son. These qualities were seen in his non-patronising and accepting performance. Shelley was a wonderful addition as his wife showing her fears and later warmth for their child in her strong maternal performance.

I am going to avoid the remake of this film as I adored this version so much. So instead I’ll check out the original’s sequel, Children of the Damned (1964). But before I go, one last chilling observation about Martin Stephens…

He has the same surname (in real life) as that other child actor, Harvey Spencer Stephens. This latter kid played Damien Thorne in The Omen film, so should we worry… if there’s a whole village of little Stephens kids, with jet black hair or hair as white as snow… but eyes as black as coal… until you cross them. Then it’s you, that’s damned… 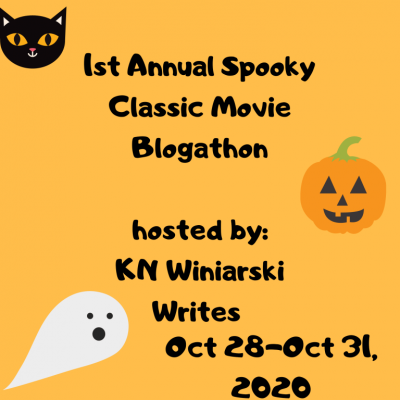 This review was added to KN Winiarski Writes’ 1st Annual Spooky Classic Movie Blogathon. Other films with this cast include Martin Stephens in The Innocents. Peter Vaughan is in Death at a Funeral. George Sanders and Michael Gwynne were in The Man from UNCLE TV series.  Barbara Shelley was in The Avengers, Eastenders, Doctor Who and The Man from UNCLE.