On Ken Kercheval in Dallas. On his role as Cliff Barnes, JR Ewing’s rival in business and love. 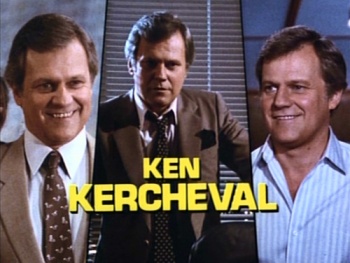 In those Dallas credits

However, Kercheval was in Dallas (1978-91) for the whole of the original series as Cliff Barnes. He also starred with those Dallas spin-off movies and in the recent reboot. Sharing this accolade with Larry Hagman’s J.R. Ewing, Barnes’ arch rival.

He was originally cast as Ray Krebbs, but instead taken on as Cliff Barnes. So as a life long Dallas fan, I was sad to hear that Kercheval passed away recently. Sadly, I’ve not seen any of Kercheval’s other screen appearances that I can remember in great detail. So instead, I’m going to gitter about my favourite of his Dallas moments.

A wee biography of his character now, for those who haven’t seen Dallas, Cliff Barnes was the son of Digger and Rebecca Barnes. He was Pamela Ewing’s older brother and Katherine Wentworth’s half-brother. With the Barnes family in a feud with the Ewings.

This feud had started by their respective patriarchs Jock and Digger partner back in the 30s, the pair falling out over oil and a girl (Miss Ellie, who chose to marry Jock). This family feud continuing for much of the original series now passed down to their sons J.R. and Cliff. This all kicks off again when his sister Pam (Victoria Principal) married J.R.’s wee brother, Bobby Ewing (Patrick Duffy) as series 1, episode 1 began back in 1978. A full review of this soap found HERE.

Admittedly I was always Camp J.R. Ewing, but Cliff was always admired for his constant persistence in bringing the dastardly one down. With Barnes getting the last laugh as the final credits came in 1991. So here in no particular order are my favourite Dallas moments from Kercheval…

Dallas: Cliff tells Sue Ellen he can’t be with her, Storm

In series 2, with Kercheval now a regular fixture, his character Cliff hit J.R. Ewing where it hurt. With Cliff embarking on an affair with Sue Ellen, J.R’s pretty neglected wife. Leading to an in-series Cliff hanger when she fell pregnant to one of them. Cliff discovering his father had a hereditary neurological condition that he may have passed onto this child. After a DNA test, the child named John Ross Ewing the third revealed to be…

Body in the Pool

DALLAS – Cliff Discovers A Body In The Southfork Pool, Dallas70

Series 3 ended with Cliff diving into the Southfork pool, where an unknown brunette was seen floating face down. However believed to be either Pam, Sue Ellen or even Kristin. With J.R. involved in a possible murder, but of whom?

This woman appeared to have fallen from his bedroom’s balcony. It was also up for debate as this series took a break as to whether J.R. would implicate Cliff in her death. The following series revealed all with the dead body belonging to…

Dallas: Angry Cliff Barnes tells Afton he can’t have a relationship as long as J.R is around, Storm

Cliff and J.R. both bedded J.R.’s niece, aka Lucy’s husband Mitch’s sister, Afton Cooper. With Audrey Landers playing this role in both the original and reboot series. Afton was a pretty blonde singer who captivated both men. J.R. slept with her on his niece’s wedding day, Cliff slept with her afterwards when she worked for J.R. against him.

Afton then fell for Cliff’s charms. With her, one of the loves of his life along with his Chinese takeaways. This until Jamie Ewing, a long-lost Ewing with a claim to Ewing Oil appeared on the scene. But it’s revealed Afton had a daughter in a later series…

This was my favourite episode, as I do like a Dallas wedding. Sue Ellen (Linda Gray) was looking lovely with JR in a tuxedo…  and later Bobby in the pool. Rewinding a bit, my favourite Ewings were about to remarry, the pair taking their vows in the Southfork Drive. As Ewings do.

Once they got to the bit “where any man with just cause” can stop the wedding, a moment of tension. This felt like forever. At home, my x-year-old self is biting her nails and stifling a scream. Cliff Barnes stands up, I inwardly sob. Then the bloody credits rolled. Tuned in the next week and…

Dallas: Conundrum – Cliff Barnes is Vice-President of the United States of America, Storm

In a nutshell, J.R. is taken on a Twilight Zone type journey to see where significant others in his life would be if he hadn’t lived. So Bobby’s a gambler, Sue Ellen’s on the wagon, Gary’s a successful divorce lawyer and Cliff’s the Vice President of the USA. That is until the President dies… The final episode is written about at length HERE.

So I’ve left you with just a few cliffhangers, I know the answers to these. But those accompanying clips may just reveal all or might be just random. But here’s the major cliff hanger, that I’ve still to discover. The Barnes and Ewing family were always both rivals in love and business. This starting with Digger and JR’s daddy Jock and this passing onto J.R. and Cliff.

Onto the reboot. I’ve still to see this but gather Bobby and J.R.s sons are at loggerheads and not just over the business, where I believe Cliff made an appearance as a father to..? So once I discover the ins and outs of this series, I hope to gush over the moment when Kercheval appears in that long-awaited viewing. In you guessed it, a cliff hanger.