Robert De Niro’s Leonard is waiting for a cure from his catatonia, with a sympathetic, gentle and inspiring doctor. 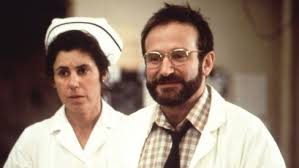 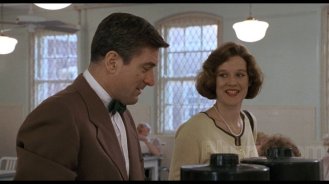 When Crystal at In the Good Old Days of Classic Hollywood invited me to join her in hosting the Robin Williams blogathon, it came with perfect timing. I’d just discovered Awakenings (1990), one of my much-loved movies on a certain movie streaming channel. This is my favourite of Williams’ performances.

His co-stars Robert De Niro and Penelope Ann Miller providing wonderfully poignant and stirring performances in this true story. The film also stars Max von Sydow and John Heard. The film based on the events at a New York Hospital in the summer of 1969.

In this film, Robin Williams proves he can do so much more than be the fun and comic guy we know so well, in his Awakenings role of Dr Malcolm Sayer. Sayer is a nervous, shy doctor based on the famous British neurologist Oliver Sacks.  These miraculous events occurring early on in Sacks medical career.

The film telling of Sacks’ discovery of how the newly developed drug L-DOPA was (sadly) a temporary cure for his long-term, catatonic patients. This drug bringing these patients short-term relief from their symptoms allowing them to return to normal lives and functioning.

The film starts in flashback, centering around young 11-year-old Leonard playing with his friends. It is only when he carves his name on a bench, that you notice the tremor in his hand. In these opening scenes, over time, Leonard’s tremor is seen to effect his writing.

In turn his exemplary school record deteriorates. This to the concern of his mother and others. Eventually Leonard takes to his bed as his tremor continues and he no longer joins his friends to play.

We then go forward 30 years to 1969, where Sayer (Williams) is at an interview with Dr Kaufman (John Heard). Sayer is shy and bashful, and we can feel this in Williams’ painfully jittery performance here. We learn how Sayer who had hoped to get a research laboratory job, and has no experience of working with people.

Sayers then offered an untaken doctor’s post on a long-term neurological ward, nicknamed “The Garden”. He takes it. The name explained by the doctors in the film as the patients only need “fed and watered”.

Sayer is awkward, jumpy and nervous round the patients and others. Reassurance and support is given through Nurse Costello (Julie Kavner) with whom Sayer slowly forms a good relationship. Although single and living alone, he declines to join her for a coffee with him engaging more solitary pursuits.

Sayer learns these catatonic patients can be reached and they respond to actions, their favoured music or human contact. He learns more about Leonard (De Niro), now a young catatonic man – diagnosed with Atypical Schizophrenia – through his elderly mother.

His mother cares for Leonard’s physical needs at the hospital and we get an insight into these then lives of this catatonic patient and the others. Sayer communicates with Leonard through an alphabet board, gaining insight into Leonard’s feelings.

After attending a talk on L-DOPA by a pharmacist (Peter Stormare), Sayer asks to use this new drug believing it will help these patients. This idea is rebuffed by the board due to its high cost, but he is allowed it to try the drug on one patient.

He tries the drug out on Leonard, who after the correct dosage is given, has miraculous results with him “awakening” fully from his catatonia. His initial scenes are endearingly sweet – but not patronisingly so – as he is reunited with his mother.

With some wonderful scenes showing this awakening period as walks, talks, writes and smiles. And showing Leonard’s humour, understanding and empathy. In a heart lifting scene with Sayer, he experiences late 1960s life on a trip outside the hospital.

After seeing these wonderful results through a film Leonard makes with Sayer, funding is given to fund L-DOPA for other patients by the staff and hospital donors. With some wonderful stirring scenes the patients who are given the drug “wake up” to learn about their lives as they are now years on. This “awakening” sometimes for the better and sometimes for the worse. In these evocative scenes and montages, we and the staff learn more about the patients as individuals.

Leonard himself, having awakened many years after he fell into his catatonic state as a 20-year-old, learns to experience life as an adult.  He meets Paula (Miller), a stroke patient’s daughter. They form a strong friendship and he becomes romantically interested in her.

Paula gaining insight into her father’s then condition, and Leonard in being seen as a “normal” adult. As the patients continue to live fully functioning lives, the patients learn sadly this relief from their symptoms, will be for a short time. As Leonard’s symptoms are slowly returning…

Williams shows a rare more sensitive side to his acting skills with his wonderfully touching performance of this doctor. We can feel through his body language and this character’s initial nervousness and awkwardness round the patients and others. It is wonderful to watch these slowly evaporate, as Sayer’s confidence increases in his interactions with his patients.

This an awakeing for him. It is lovely to watch Sayers increase in confidence particularly with Leonard and the medical and nursing staff. Williams shows the gentle, caring side to this character both emphatically and realistically.

His performance in non patronising and convincing manner throughout. It is only sad that this acting side to Williams was not seen more in more movies with him and he deservingly received a Golden Globe nomination.

Robert De Niro also shows a moving, emotive portrayal of Leonard with one of his most mesmerising performances of his career. He shows the physical symptoms that Leonard experiences in an authentic rather than sensationalist way.

As we experienced Leonard’s journey from his awakening to his return to catatonia, we share his joy and sense of wonder during that short period. Heartwarming scenes of Leonard on his trip with Sayer outside the hospital, seen through Leonard’s eyes, made you feel that you too were experiencing these events for the first time. In contrast, his scenes where his physical symptoms return are more heartbreaking and emotional.

Penelope Ann Miller in her supportive role as Paula, adds a lovely sweet performance. Her scenes where Paula learns about Leonard and his situation were tenderly and genuinely played. In her performance, she showed great depths to her character. Paula showing her support for his character from their first meeting to when his symptoms had fully returned.

This in a naturalistic and strong performance from the actress. My favourite of her scenes is with De Niro, being when Leonard’s returning symptoms are temporarily stopped as she dances with him. This in a short heart-rending but effective scene. The possible romance in this movie played down, made this short scene all the more intense.

At the conclusion of the movie, we learned through the tragic but heartwarming epilogue that this was the longest but not the last of those patients awakenings. With the words of this song, ironically named Summer of 69 – from Bryan Adams – could almost describe how Leonard and his fellow patients must have felt that summer, with those now haunting lyrics..

That summer seemed to last forever
And if I had the choice
Yeah, I’d always wanna be there
Those were the best days of my life.

This post was written as part of the Robin Williams blogathon as held by myself and Crystal from In the Days of Classic Hollywood. Other posts written about this cast include Robin Williams in a cameo in A.I. Artificial Intelligence Julie Kavner appears in Surrender. Penelope Ann Miller  in Chaplin and Adventures in Babysitting. Max von Sydow also appeared in Shutter Island, Escape to Victory, Star Wars VII – The Force Awakens and Dreamscape. John Heard movies are tributed here and he is reviewed in Beaches.